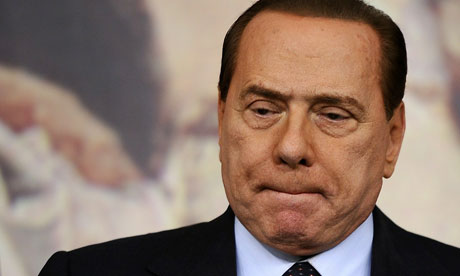 Berlusconi, who has previously described himself as single since his wife left him in 2009, is under investigation on suspicion of paying Moroccan dancer Karima el-Mahroug for sex at his mansion near Milan when she was 17, an offence in Italy.

In a video message aired by one of his TV channels last night, Berlusconi said he had been quietly dating a woman, whom he did not name, since his marriage broke down.

"This person has obviously been with me rather often, including – and I underline this – on those evenings and certainly would not have allowed, at dinner or after dinner, those absurd goings-on that certain newspapers have hypothesised," he said.

Witnesses have reportedly told investigators that topless women dressed as nurses and police officers performed stripteases for Berlusconi in the "bunga bunga" room at his mansion during parties held in 2010 and vied with each other to be asked to stay the night.

Police on Friday raided the apartments of around 14 alleged habitués of the parties, finding sex toys and thousands of euros in cash.

Speaking from a studio at the mansion, its shelves lined with photos of his family, Berlusconi likened the operation to a mafia roundup, claiming that the only crime committed by the women was "to give me friendship and affection" during the "elegant" and "tranquil" soirees that gave him the chance to communicate with young people.

Tackling reports he doled out large sums of cash to his female guests, Berlusconi said he was proud to help those in need "with their homes, medical care and schooling for their children, but there was never any connection between money and sexual performances".

Mahroug, a teenage runaway who was reportedly invited to Berlusconi’s parties after meeting Italian celebrity agent Lele Mora, has said she was given 7,000 euros by Berlusconi but did not sleep with him.

She has described Berlusconi as a "person who suffers from solitude, who is not very happy".

Silvio Berlusconi was tonight facing the potentially devastating possibility that he might be put on trial as an alleged sex offender.

The chief prosecutor in his home city of Milan said the Italian prime minister had been formally placed under investigation on suspicion of having sex with an underage prostitute. He was also accused of abusing his position to pressure the police.

The offences carry sentences totalling up to 15 years in jail. Berlusconi had not been charged, but had been invited to present himself for questioning, according to the prosecutor’s statement.

The previous day Italy‘s constitutional court overturned key passages of a bill introduced by Berlusconi’s government that would have shielded him from the courts. The double blow looked certain to weaken a leader whose majority in parliament has hung by a thread ever since he was deserted last year by his former ally and deputy, Gianfranco Fini.

The period in which Berlusconi is suspected of relations with a juvenile prostitute, February to May 2010, coincides with that in which Mahroug is thought to have visited his estate. She has denied having sexual relations with the prime minister, but acknowledged accepting from him a gift of several thousand euros. reed more- http://www.guardian.co.uk/world/2011/jan/14/berlusconi-under-investigation-underage-prostitute

ontroversial Italian Prime Minister Silvio Berlusconi was under fire again today as it emerged he is being investigated for extortion and underage prostitution.

The probe on Mr Berlusconi, 74, centres on his relationship with a belly dancer called Karima el Mahroug, then 17, who was a guest at a party he hosted at his home last year.

The extortion accusation centres on the pressure he put on Milan police to release the exotic dancer – nicknamed Ruby Rubacuori (Ruby The Heartstealer) – after she’d been arrested on suspicion of theft.

Berlusconi’s current term in office has been dogged by continual allegations involving women – but somehow he has managed to cling on to office even surviving a double no confidence vote in Parliament which greeted by riots in the street.

His lawyers confirmed he is under investigation in a prostitution case which they call ‘absurd and groundless’.

They said the allegations ‘have already been refuted by all witnesses and people directly involved’.

The prostitution charge centres on the allegation that he had sex with the belly dancer sometime between February and May last year and is punishable by a jail term of between six months and three years.

Two months ago it emerged that the media tycoon turned politician had called police and asked them to release Moroccan-born Miss El Mahroug after she had been arrested on suspicion of theft.

He is said to have wrongly told officers that the girl, who at the time was 17, was the grand daughter of Egyptian president Hosni Mubarak and to avoid diplomatic embarrassment she should be released.

UST when it looks as if things cannot get worse for Silvio Berlusconi, they do.

Earlier today Italy’s beleaguered prime minister learnt that prosecutors in Milan had formally made him a suspect in aninvestigation into alleged juvenile prostitution. Although the age of consent in Italy is 14, it is an offence to pay for sex with a prostitute aged under 18. According to a statement from Milan’s chief prosecutor, Mr Berlusconi is thought to have done just that. He is also suspected of abusing his position, a crime under Italian law.

The prime minister has not been charged, let alone indicted, and his lawyers have said that the accusations against him are "absurd and groundless". But whatever its outcome, this latest inquiry will be difficult for him to shrug off.

Last month, Mr Berlusconi narrowly survived a no-confidence vote in parliament. He urgently needs to woo more deputies into his camp, particularly in the lower house. He can do that only if he is seen as strong enough to serve out his mandate until 2013. But events this week have cast grave doubt on his ability to do that.

Today’s news broke just a day after Italy’s constitutional court overturned key elements in a law that represented Mr Berlusconi’s latest attempt to shield himself from the courts. That has persuaded his supporters that the release of the latest news was timed for maximum political impact, especially since the prosecutor’s statement said the prime minister had been formally made a suspect as long ago as December 21st. Mr Berlusconi has repeatedly claimed he is being victimised by left-wingers in the judiciary.

How sound the case against him is will emerge with time. But what is already known would be enough to have ensured his early departure from office in many other democratic countries.

Mr Berlusconi is suspected of having sexual relations with an underage prostitute between February and May last year. That is when, by her own admission, a then 17-year-old Moroccan girl, Karima el-Mahroug (pictured), attended parties at the prime minister’s villa near Milan. Ms el-Mahroug, who also goes by the name of Ruby Rubacuori ("Ruby Heartstealer"), had run away from her home in Sicily and become an exotic dancer in Milan nightclubs.