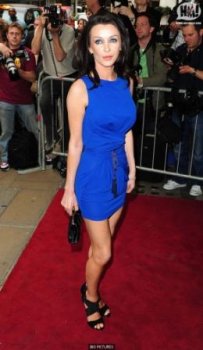 London:  Yvette Rowland is an actress and producer who is best known as the lead in the recently released gangster film ‘Killer Bitch’ which received massive Press coverage from USA to India because of it’s use of ‘real gangsters, real fights & real sex’. Yvette was involved in a notorious ‘rape’ scene with UK model Jordan’s husband Alex Reid. Yvette is also co-founder of Film & dvd production company Gangster Videos who’s latest release is ‘Tyson Unleashed’ featuring ex world champ ‘Iron’ Mike Tyson. Her next feature is ‘Nonce’ in which Yvette plays an anti paedophile vigilante.

You have starred in several television series, more notably, Byker Grove as Monica, Distant Shores as Else, Quayside as Rosie, – which of these parts would you like to be remembered by?

‘Else’ from ‘Distant Shores’ – as I come from the North East where it was filmed and the local people made me feel part of a big family – however my best parts are still to come!

Directed by Liam Galvin, the film Killer Bitch is a sensationalist action-gangster film in which you play the lead. The film is perceived by many as glorifying violence. Do you agree?

‘Killer Bitch’ was taken far too seriously, it was a low budget movie full of gangsters, girls & street fighters – great to watch after you come home from the pub. Other recent films like ‘The AntiChrist’ and ‘The Killer Within’ have been far more violent but they contain star names so the brutality is looked on as ‘art’ which is just ridiculous.

In Killer Bitch, you worked alongside Alex Reid, who did not make it to the premier of the film. In a recent interview, Director Liam Galvin implied that your co-star terminated his contract. Did you ever feel overwhelmed by this production?

Yes I did. Apart from playing the lead I also produced the film & to have your co-star walk out in the middle due to his personal life caused huge stress with massive practical & financial implications. Filming was shut down for 6 weeks while we re-cast, re-wrote & re-scheduled venues & crew. A total nightmare!

What is the most challenging aspect of being an actress?

Getting work in a male dominated industry! There are so few parts in Brit Films for women – which is why I set up a Production Company ‘Gangster Videos’ with my partner – there is no point in waiting for the phone to ring – sometime you have to create the work yourself!

Killer Bitch is a cult movie, unique in its casting of real life criminals such as football hooligan Jason Marriner, ex-jewel thief Lenny Hamilton, former bare-knuckle boxer Roy Shaw and once driver to the Kray twins, Billy Frost. What was it like to star in a production with so many hard-nosed individuals?

Yes, we had a lot of Crime names from Howard Marks to Dave Courtney – Maximum Security Prisoner Charles Bronson even did the voice over. What made it difficult is some of the cast were arrested during filming which meant constant re-writes of the script – as a woman I had to deal with a lot of male egos & fights breaking out between cast members so by the end I was desperate for female company!

Further speculations suggest that you complained to the Press Complaint Commission of an article in which you were misquoted. How should an actress deal with the love-hate press relationship?

‘Killer Bitch’ received more Press publicity than any Brit Film in years as it had real criminals, real fights & real sex – mix that with a tabloid personality and it’s a Press frenzy! The newspapers & magazines write what they want & sometimes you have to stand up to them which is what I did. My only advice is tape your interviews so you have proof of what you really said!!

You recently released a dvd, TYSON UNLEASHED, in which you interview boxing legends like Robin Reid, Tim Witherspoon, Errol Christie, Jane Couch and Mike Tyson. What motivated you to get involved with such heavy-weight celebrities?

By having a production company you find yourself mixing in very different circles – from dangerous criminals to boxing legends like Sugar Ray Leonard. We have filmed everything from showbiz stars like Shirley Bassey to Arabian Horses with Susan George! The diversity of subjects means that one week we will be at Longleat filming the Marquis of Bath and the next filming a Gypsy unlicensed bare knuckle fight!

What is your next dream to realise?

I would love to be in a soap like ‘Emmerdale’ but I also want continue to make films with my partner and give people who are not given a chance an opportunity to be in a film as opposed to using the usual suspects that appear in every movie! Time to give new talent a chance!