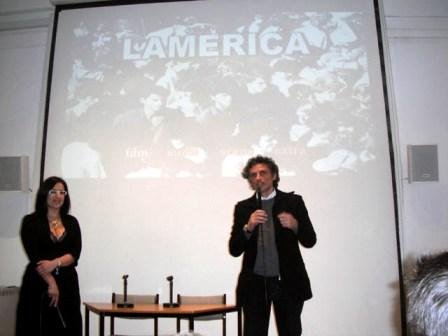 Italian Films is having a great season at the moment in . And Enrico Lo Verso, one of the new greatest actors has been in  for a series of screenings of his films at the Italian Cultural Institute thanks to the Salento International Film Festival. During the week end the handsome actor has been the guest of honour in  where after projecting his films he kindly answered questions from the audience.

The three films chosen during this season were “Lamerica” by Gianni Amelio, “Salvatore – Questa e’ la Vita “(This is Life) by Gian Paolo Cugno and “Il Ladro di Bambini” (The Stolen Children) by Gianni Amelio a film that gave him this huge popularity, a role that it should have been played by Antonio Banderas while Enrico was supposed to dub him but the director Gianni Amelio has been so taken by this actor from the South of Italy that he gave him the part.

Enrico Lo Verso mingled with the audience at the screenings, always exchanging few words with his fans and having his picture taken. Ms Patrizia Scarascia from the Salento International Film Festival introduced him before the beginning of each film talking about what the audience would have seen and then asking Enrico Lo Verso for some insight. After the screenings the actor was ready to be questioned by the people crowding the room, recounting anecdotes during the shootings.

With his films the Italian Cinema has been awarded and nominated for many international and national prizes and young directors have been acknowledged for their works.

In particular Gianni Amelio who directed Enrico Lo Verso in a couple of films and two of them have been screened during this week end. In both, the audience heard, the script was non existent and the actors knew on the same day what they where going to do. Also, another anecdote about the film “Lamerica” tells of Marcello Mastroianni application to star in that film, but the director Amelio turned him down deciding to cast an unknown fisherman from the South of , Carmelo di Mazzarelli.

Big thanks to the Italian Cultural Institute, Enrico Lo Verso and Luigi Campanile, organizer of the Salento International Film Festival for setting up this series of films shot in the South of Italy.