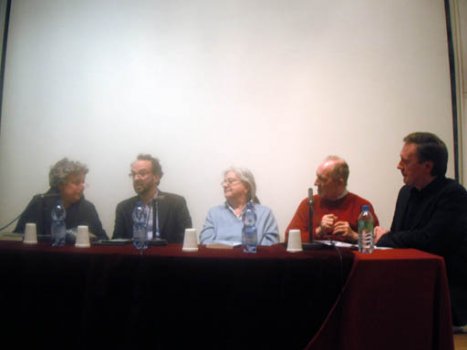 Alessandro Perissinotto and Michael Gregorio, the latter hiding a couple formed by Daniela De Gregorio and Michael G.Jacob, have been the guests of honour at the Italian Cultural Institute for an evening talking about crime fiction.

Alessandro Perissinotto, visibly overwhelmed by the people came to see him and know more about his latest crime fiction novel “Blood Sister” published by Hersilia Press and translated by  Howard Curtis has been questioned by Barry Forshaw and Michael Gregorio about his inspirations for his books and the fact that Italian crime fiction is very regional, and the characters feel their belonging to the towns where they work with reference to food or landmarks like Montalbano by Andrea Camilleri or the characters by Carlo Lucarelli.

During the evening the audience knew better this Italian writer from that by his own admission said that he was supposed to be a factory worker at FIAT after studying in a technical school and then he landed a job at newspaper writing about crime news, a source for his books. He is a literary phenomenon and yet despite his fame in he is a very quiet person, with a calm voice and a lively spark in his eyes.

Very different is the duo Michael Gregorio, husband and wife, who entertained the audience with accounts of how they work together, their bickering during translations, Ms Daniela writes in Italian and Michael translates in English. What the public saw was a very close couple, living in after meeting in years ago, a partnership in life as in a professional base. Their historical crime fiction set in 19th century in is very popular being translated in 24 foreign languages with their latest book “Unholy Awakening”.

As a trait of union among these writers Barry Forshaw, writer of the “Rough Guide to Crime Fiction” and other books on the same subject has been the perfect host for this evening. After a round of Questions and Answers from the audience the Italian Bookshop set up a point of sales with books from both authors so the public could purchase them and have them signed.