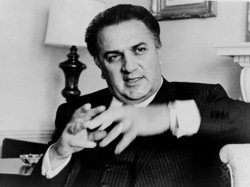 The Italian Cultural Institute, in celebrating its Film Festival dedicated to Food and Cinema, has dedicated an evening to the great Italian director Federico Fellini.

Together with the Regione Emilia Romagna the event covered Fellini’s career showing two short films and a concert has been organized with music by Nino Rota, Fellini’s favourite composer.

The first film called “Food in Federico Fellini’s Cinema” shows how food was important for the director. Famous scenes from films such “La Strada” (The road), “Satyricon” or “Ginger and Fred”, have the food as the star with big tables full of guests surrounded by dishes overflowing with pasta, meat and the noise of chatters during a lunch or a dinner. The audience could recall the sophisticated dinner in “Casanova” or the humble diners in a “trattoria” shouting orders and asking for the popular roman food in “Roma”. The reason why Federico Fellini was so entranced with food was because his father was a food trader so since when he was a child he was used to big tables, a big family dinner and these memories appear in his films.

The second film shown was a cartoon based on Fellini’s drawings and made by Andreij Khrzhanovskij “A Long Journey”, where the characters were in this big ship going to an and it is possible to recognize his wife Giulietta Masina and sketches of several of his films all mixed together. His drawings were his inspiration for his films where the actors were going to have a grotesque make up resembling puppets or masks in a Venetian carnival.

After the films, Fellini’s niece, Francesca Fellini Fabbri remembered her famous uncle with anecdotes of a family life exuding affection for two great members of the Italian cinema. Giulietta Masina has been declared one of the best actresses in the world by Charlie Chaplin and she acted in quite a few of her husband films.

A concert followed where Mauro Maur with his trumpet and pianist Francoise de Clossey played a selection of Nino Rota’s music for Federico Fellini’s films. The hall filled up with the recognizable notes of “Amarcord”, La Dolce Vita”, “8 ½” and more for the joy of the audience. When the music in the program ended and the applause erupted the public has been treated to an encore, another piece of Nino Rota, not from Fellini’s films, but the theme of “The Godfather 2 “.

The Italian Cultural Institute, with this tribute to Federico Fellini, promoted once again the Italian cinema to an international audience, giving a small insight in the work of one of the greatest Italian directors.