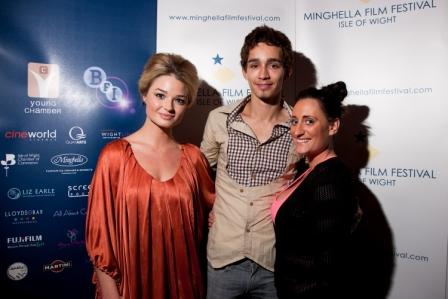 Between March and April quite a few film festivals are running, just after the Oscar awards and the Bafta. Big cities generally are the ideal locations for such events, but an illustrious festival, the Minghella Film Festival, has been organized at the Isle of Wight attracting a crowd of actors, directors, producers and screenwriters and over three days a full program of events took place in this beautiful island, chosen by Queen Victoria as her holiday retreat.

Renowned director Anthony Minghella, who was born in Ryde on the island and with Italian roots from both his parents, is known for films like “The English Patient” winner of nine Oscars and six Baftas, “The Talented Mr Ripley”, “Cold Mountain”, another film that bagged one Oscar and one Bafta and that only his untimely death in 2008 put a stop to an artistic heritage that made Great Britain and also Italy proud of this talented director.

Minghella‘s family has been running this festival for the last three years to showcase young new filmmakers and also established ones.

On its first day the crowd has been treated to a short film competition award with screening and an after party. Celebrities like Emma Rigby, who can be remembered for her role in Holly Oaks, Robert Sheelan and Lauren Socha from E4 TV series “Misfits”, were among the guests and Mr Sheelan together with Ms Socha awarded the winner of the short film competition “Change”.

On Saturday the crowd puller has been a conversation with Ralph Fiennes who acted in Anthony Minghella’s “The English Patient” while Sunday another important appointment has been with Hugh Bonneville, famous for his roles in “Notting Hill””007 Tomorrow Never Dies” and “Iris”, among other successes on the silver screen and in TV. The actor has been on stage for a “Questions and Answers” that looked endless with the audience asking more and more.

Retrospective of films produced by Anthony Minghella and Italian films directed by Federico Fellini where in the program among other events for another successful edition of this festival which is a great platform to introduce new directors, producers, writers and actors to the film industry.