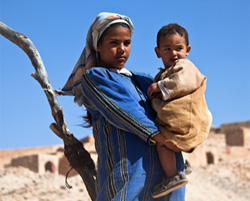 Italian cinema London We would like to bring to your attention some of our own new discoveries, which we have included in Italian Cinema London 2011 programme.

Mary is not only the mother of Christ, but rather a courageous heroine fighting against the social and moral laws of her time. A challenging and absorbing portrait, minimalist in its outlook and revealing in its message.

Summer 1980s, a solitary beach in Southern Italy, the friendship between a captain of the US army and a 14-year-old boy. A coming-of-age story narrated with a fresh and delicate touch, one of the most acclaimed debut features of the year.

La bocca del lupo / The Mouth of the Wolf

A man returns after a long absence. The Genoa of his memory has vanished, but someone is still waiting for him at home. A spellbinding blend of documentary, fiction and poetic experiments. A human and cinematic triumph, prize-winning at Turin and Berlin.

The Four Times is an extraordinary sensorial experience narrating the cycle of life in a small village in the Calabrian mountains. This audiovisual masterpiece depicts the tale of an old shepherd, a kid goat and the ancestral ritual of transforming a majestic tree into coal. Revelation at the Quinzaine des Realizateurs, Cannes.

Different from anything you have ever seen, this film is fresh and incredibly deep as only teen-agers can be. A combination of extreme stories seen through the eyes of thirteen/fourteen year old: intense love and hatred, the discovery of romantic sex, the rebellion against parents and rules, the fight against poverty.

An incredibly subtle description of the coming-of-age of a generation on the outskirts of a multicultural Cagliari in Sardinia. A film scripted and directed by students. Winner of the UK’s Italy Creative Industries Award and Best Innovative Budget at the 67th Venice Film Festival.

All love stories are unique, but some defy conventions more than others. Only a few really teach us how diverse love can be. Three stories told from the point of view of three unconventional women.

An act of civil passion, a heated reflection on contemporary Italy. Through the songs of top Italian singer Luciano Ligabue – a documentary against indifference, in a country that is longing for changes.

Join us to celebrate the work of Italian cinema maestro, Bernardo Bertolucci, the man who inspired the likes of Martin Scorsese and Francis Ford Coppola. Our two month season includes an extended run of his brilliantly assured second feature Before the Revolution, plus Marlon Brando at his finest in the controversial Last Tango In Paris and the Oscar winning historical epic The Last Emperor.

Our friends at BFI offer BFI members discount on tickets for all our newsletter recipients – ie £1 . 50 off all tickets/events. This can be redeemed over the phone BOX OFFICE – 020 7928 3232. or in person at the BFI Box office if Italiancineamlondon is quoted