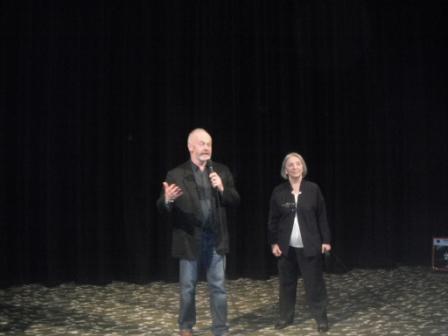 Spring in London means the starting of the Italian Cinema London that brings to the city the latest Italianfilms of every genre with the participation of directors and actors answering questions from the audience atthe end of the screenings.

This year the ICL partners with Genesis Cinema in Whitechapel, the Phoenix Cinema in East Finchley andthe Estorick Collection in Islington for a series of events.During the Italian Cinema London a retrospective dedicated to Massimo Troisi, prematurely dead whileshooting the film “ The Postman”, attracted many people mainly Italians but, thanks to subtitles by Sub-Tiit has been possible for everyone who speaks English, to enjoy gems like “ Non Ci Resta Che Piangere “(Nothing Left To Do But Cry), or “ Ricomincio Da Tre” (I’m Starting From Three), up to “Che Ora E’”(What Time is It) with another unforgettable actor like Marcello Mastroianni.

Troisi started as a comedianactor but his latest films were quite serious, bittersweet, unfortunately his affectionate audience couldnot see his metamorphosis. After the screening of “The Postman” the director Michael Radford talked toprofessor David Forgacs of UCL remembering his days during the shooting of the film with a MassimoTroisi extremely ill and where, he revealed, it has been used a double in 60% of the film.

Philippe Noiretwho plays the part of Pablo Neruda, hardly act with Massimo Troisi and nearly all the takings have beenshot separately with Troisi’s takings shot only once. The audience found impossible to divide the fate ofthe actor with the fate of the character in the film and a during the screening and the talk many were visiblymoved by the scenes and the account of Michael Radford. This film will remain a legacy for a great Italianactor, loved by everyone.The festival, organized by Clara Caleo Green and her team, has become, from a local festival in Edinburgh,a major event where that is passionate about Italian films can see the latest releases and the new generationof directors and actors.The festival opened with the film “Into Paradiso” by Paola Randi with Peppe Servillo, Gianfelice Imparatoe Gianni Ferreri among others great characters. The film is set in Naples in a different environmentgenerally associated with this city.

The Sri Lankan community has been the background and the set for thisfilm where two different worlds and cultures meet each other.After the screening, the director Paola Randi and one of the main actors, Peppe Servillo have been ready toanswer questions from the audience. This has been the first film for director Paola Randi and despite beingfrom Milan she decided to set her story in Naples.The actor Peppe Servillo, who is mainly a singer from the Italian rock jazz band Avion Travel, treated theaudience to a Neapolitan song.The festival is running until the 10th of April and a great selection of films is available at all the threevenues.