GENEVA,  Fighting in Misrata and other cities in Libya is denying medical aid to civilians and causing casualties among health personnel. The Libyan Red Crescent reports that in the past four days, three of its ambulances have been hit in three separate incidents, resulting in the death of a nurse and injuries to a patient and three volunteers. In addition, the ICRC has received allegations concerning the misuse of the red cross and red crescent emblems to support military operations and the use of ambulances to transport arms and weapon bearers.

“All parties to the conflict must refrain from harming injured people, medical personnel, medical vehicles and medical facilities,” said Georgios Georgantas, the ICRC’s deputy head of operations for North and West Africa. “Medical personnel and ambulances must be allowed to reach the wounded. We reiterate our call to the authorities and to all weapons bearers to respect medical services and the emblems of the red crescent and red cross.”

Misrata’s two main hospitals are struggling to cope with the injured, a situation made worse by the fact that many specialized doctors and nursing staff have fled the city. “Treating critical cases is difficult, and it is currently impossible to treat cancer patients and people with chronic diseases,” explained ICRC doctor Gabriel Salazar. An ICRC team last week visited Al Hikma Hospital and the Libyan Red Crescent Hospital, delivering surgical kits and dressing materials. The team evacuated 108 civilians from Misrata to Benghazi. A total of 35 of these patients were hospitalized, with 25 of those having suffered weapon wounds.

Civilians at risk from unexploded munitions in Misrata

“The streets of Misrata have been heavily scarred by the fighting. The scale of the destruction is impressive and there is a large quantity of unexploded munitions lying around,” said Herby Elmazi, the delegate in charge of operations to reduce these risks in Libya. “We have assessed the situation in Misrata over three days and can confirm that weapon contamination in the city is placing the civilian population at considerable risk,” he explained. “There is an urgent need to get these devices removed, and we hope to start work on this next week. Our approach will include training local volunteers and providing them with proper equipment so they can clear the most affected areas of the city, making it safe for civilians to move around.”

Meanwhile, the ICRC clearance team is continuing its activities in Ajdabiya, working closely with volunteers from the Libyan Red Crescent. So far, 300 unexploded devices have been removed from houses and streets. As a result, a large number of families have been able to return home safely, despite the unsettled security situation.

Access to water remains problematic in Misrata. People continue to rely on the desalination plant and the local wells. The ICRC team will continue to monitor the water situation closely over the coming months. Fuel is still available for the moment but that could change in the next two or three months. The ICRC has delivered electrical equipment to the Libyan General Electrical Company in the city so that they could carry out repairs.

During its three-day visit to Misrata, the ICRC team delivered food and other essential supplies to around 300 foreign nationals living in the camp run by volunteers from the Libyan Red Crescent.

Delegates also visited and registered 185 detainees in two places of detention under the authority of the Libyan Armed Opposition. More than 170 “safe & well” messages were collected and will be delivered to the families of those detainees, who are anxious to receive news.

Since the beginning of the conflict, the dedicated volunteers of the Libyan Red Crescent society (LRCS) have been hard at work helping civilians. As partners in the International Red Cross and Red Crescent Movement, the ICRC and the LRCS are working together to help internally displaced persons, re-establish contact between separated family members, make civilians (especially children) aware of the risk of unexploded munitions and inform the ICRC munitions clearance team about the areas that need to be cleared most urgently.

ICRC support to the LRCS has included giving mine-awareness training to 16 volunteers from different branches in eastern Libya, who will be training their colleagues and teaching civilians about the risks in their areas. So far, more than 1,800 people have attended mine-awareness sessions, 200 of them children.

The ICRC has also provided LRCS staff in Benghazi and Misrata with satellite phones, so that families can re-establish contact. So far, more than 4,500 phone calls have been made inside Libya and abroad.

Finally, the ICRC donated 15 vehicles to various branches of the LRCS, both so that volunteers could carry out programmes developed jointly with the ICRC and to strengthen the operational capability of the Libyan Red Crescent in general.

Assistance at the borders

In south-eastern Tunisia, the ICRC, the Tunisian Red Crescent and the International Federation of Red Cross and Red Crescent Societies are continuing to assist civilians arriving from Libya. According to UNHCR, some 4,600 stranded foreign nationals are still in the Choucha camps in the vicinity of the Ras Ajdir border crossing. On the other hand, the number of refugees at Remada camp near the border at Dehiba has fallen to 1,600, as many refugees are staying with host families.

Since late February, the ICRC has enabled over 56,000 telephone calls to be made, allowing people who have fled to Tunisia to re-establish contact with their families. Over the past few days, the organization has donated nearly 5,000 blankets and some 2,750 hygiene kits to the Tunisian Red Crescent in Sfax, so that the National Society can distribute them to Libyan refugees in the border camps.

At the Sallum border crossing in Egypt, the ICRC and the Egyptian Red Crescent last week provided breakfast for an average of 1,100 people per day. During the same period, people stranded at the border made over 300 phone calls to their families. In addition, the ICRC continues to help people who are neither Egyptian nor Libyan to get the papers they need in order to return to their home countries. 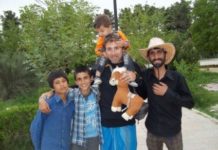