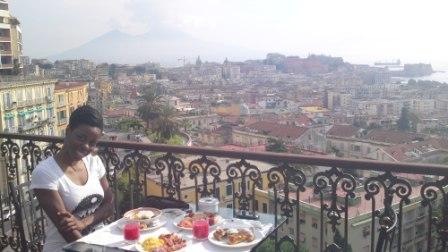 Love Affair with Naples by Ateesha Calvin Smith – City of London professional Yes! Until now I was a virgin to the Neopolitan way of life! However, on the last weekend of October 2011, a new realisation dawned. A simple, British holidaymaker found herself unwittingly out-manoeuvred to the back of a ‘queue’ by a host of seasoned Naples visitors and residents – all of whom knew far better than she did, of what awaited them beyond the Easyjet doors.

Bemused, I watched the en-masse dash down the steps and towards the immigration port with passports brandished in eager hands. Lunging towards the immigration desk they eyed-up the exit sign that beckoned to them from behind the head of the immigration officer. After funnelling my way through the crowd, I emerged from the airport and was hit by what must surely be the intoxicating, unquantifiable element that pulls people back to Naples year after year – the energy! A palpable, passionate energy that resonates throughout the city! My designated driver ushered me through a sea of people to the reassuring comfort of his waiting vehicle.

Once in and buckled-up, we whizzed through the densely populated, cobbled, winding streets of Naples.

My eyes darted from left to right as they tried to take in everything that was happening in the fast moving environment we were barrelling through. The air was filled with a sense of urgency and impatience which was heightened by the cacophonous sound of free-flowing horn blasts, combined with the dare-devil riders on scooters that menacingly snaked their way between the traffic. They gesticulated defiantly to any 4 wheeled automobiles that tried to intimidate them.

Men and women frequently embraced as they greeted each other outside coffee shops and restaurants. Journeying up the mountain towards my hotel, the tightly packed buildings seemed to be carved into the mountainside.

The architecture was compelling and hard to ignore – varied in period, design and colour. Many of these historical structures, however, were defaced by graffiti scrawling stamped up and down their sides. But somehow, not even the graffiti could detract from the vibrancy of the city. The staff at the Grand Hotel Parker was extremely welcoming.

As he showed me to my room, the Bell Captain enthusiastically filled me in on the key sites that I should visit during my stay in Naples, before he magically revealed my palatial room with amazing sea and landscape view – I could see Mount Vesuvius from my window! Although I was relaxed, I was also aware that the real Naples could not be discovered from the comfort of the breakfast terrace.

That day I had to attend the birthday party of a friend who had adopted this region as her new homeland. However, after a sumptuous and, to be honest, a rather over indulgent breakfast of Italian pastries, cured meats, cheeses, fruit etc., the thought of reaching my friend via a long, scenic stroll on this unusually warm October day, was far from appealing…. Taxi please!…but be warned my friends, the taxi meter starts racking up the bill the minute it arrives outside your front door.

This was a lesson learnt the hard way by allowing the taxi to wait 10 minutes outside the hotel lobby.

The wait cost me more than the actual journey itself! Although annoyed by this swindle (and my tardiness …but I can’t blame myself…I’m on holiday!), I bade farewell to the taxi-driver and stepped out into Rosiello; a restaurant elegantly etched into the hillside of Posillipo with breathtaking views of the Neapolitan landscape.

The company was excellent and there was food….so…much…food! The gregarious waiters rolled out course after course of fish, pastas and seasoned vegetables, ensuring that our wine glasses were always full and that each dish was accompanied with cheerful banter. Whilst the food was enjoyable enough, I wouldn’t say that it was Cordon Bleu quality.

The sea-salt crusted, oven grilled sea bass was particularly a disappointment as I felt that it was lacking in flavour and relatively dry.

Regardless, the meal was plentiful and pleasant, and was nicely rounded off with a glass of traditional limoncello. Stuffed to the hilt, my friend kindly rolled me into a taxi which took me into the city centre so I could begin my spot of retail therapy.

I sauntered down the high street and zig-zagged in and out of endless shops, high end boutiques and popular retail stores. Along the way I was amazed by the speed at which the street sellers, who accosted me with their earrings, ‘genuine’ designer bags and jewellery, managed to bundle up their goods and vanish into thin air as soon as they heard the Polizia approaching. After a leisurely coffee in the famous Caffe’ Gambrinus with a friend, I took public transport via the Funicolare up the mountain side, walked 5 minutes back to my hotel and promptly collapsed on my bed! Eager to explore the islands of the region, Capri beckoned me the following day. Seated on the open air section of the ferry, and watched over by 2 stern looking Neapolitan seamen, I looked back at the mainland that was rapidly fading into the distance.

I enjoyed the sensation of the refreshing sea-breeze whipping past my face as we blasted through the ocean waves …that was until some boob of a passenger tried to climb onto the side of the ferry to get a ‘better view’ of Naples! That got us all sent indoors where the view was, quite frankly, rubbish. However I could see the picture perfect Capri as the ferry docked. All the usual touristy palaver awaited us in its port; souvenir stores, coffee shops, postcards etc.

My friend and I did the dutiful thing and purchased an over-priced (but delicious) gelato from a gelateria and began our ascent towards Piazzetta di Capri through a maze of flower strewn side-alleys, cobbled streets, perfumeries and designer stores. Nestled in an unsuspecting corner of Capri was the Garden of Augustus (yes Roman Emperors holidayed here).

The park was so romantic and dotted about this idyllic haven were little nooks for lovers cuddle into and enjoy breath-taking views amidst the heady perfume of the flower garden. Back on the mainland, there was one final stop that had to be made before heading back to Blighty. As my friend and I walked up to the Pizzeria del Presidente (famously named after Clinton had a Margherita pizza there in 1994) in the city centre, my appetite re-awakened in expectation of consuming the traditional Neapolitan pizza (soft with madre dough).

However, on arriving there at 6.30pm we were informed by management that we were too early for dinner that typically starts in Naples at 8 o’clock in the evening.

Thankfully, the restaurant owner took pity on us and covertly ushered us down into the sepia-lit cellar of the eaterie, away from prying eyes and other expectant customers! In distinct contrast to the overpriced cuisine at Rosiello in Posillipo, the buffalo mozzarella pizza was not only delicious and flavorsome but relatively inexpensive.

I chased down my sourdough pizza, topped with tomatoes, mozzarella and basil, with an ice-cold Moretti beer. Divine! As I reluctantly climbed those Easyjet steps on my return journey, I sighed as I reminisced about my fleeting but fantastic break in this Southern Italian region. I smiled at the knowledge that this unforgettable experience could never be just a weekend fling. With so much more to see, do, experience and re-live, it would forever be a long-term love affair.I’ll be back Naples…I’ll be back!