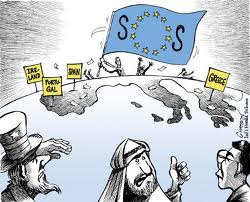 France and eight other Eurozone countries suffered ratings downgrades on their sovereign debt Friday, sparking renewed global worries over Europe’s ability to bail itself out of financial crisis. Another memory jog came Friday from Greece, the original source of Europe’s debt troubles.

The first rumors were widespread downgrades in the Eurozone in the afternoon, when thestock markets veered sharply to the downside. Milan, who lost up to 2.5% also closed down1, 2%. The ‘Euro closed sharply down to $ 1.2683 against the dollar.

Talks hit a snag between the new Greek government and the banks and other private investors that Athens hopes will agree to take losses on their debt so that Greece can avoid a default. European politicians, in turn, criticized S.& P.’s downgrade plans as providing no meaningful new information to investors but simply stoking a sense of crisis. S&P, which in December placed 15 of the 17 euro-zone countries on watch for possible downgrades, said Friday it had decided to lower the debt ratings of nine of them because it felt the currency bloc has so far failed to take adequate action.

Finance Minister François Baroin of France said Friday that the loss of his country’s pristine AAA rating, cut a notch to AA+, was “not good news” but was “not a catastrophe.” He insisted that the country was headed in the right direction and that no ratings agency would dictate the policies of France, which has Europe’s second-biggest economy, behind Germany’s. 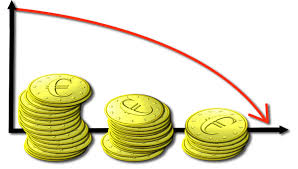 After Friday, the only euro zone nations retaining their top AAA ratings are Germany, the Netherlands, Finland and Luxembourg. Italy and Spain, which are considered the two big euro-zone economies most vulnerable to an escalation of debt problems, both were downgraded two notches, Italy to BBB+ and Spain to A.

The banks of the ‘Eurozone, while supported by the cash obtained from the ECB’semergency loans, continue to seek shelter in the coffers Eurotower certifies as marked byyet another record high overnight deposits now come to touch the 500 billion.