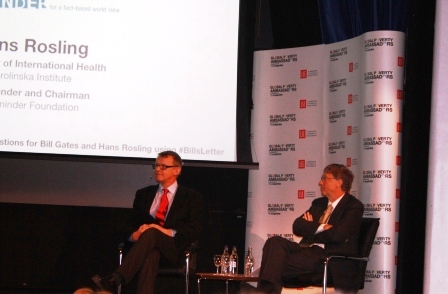 Today at the LSE in London, Bill Gate, co-Chair of the Bill&Melinda Gate Foundation, and Hans Rosling Professor of International Health at Karolinska Institute and co-founder and chairman of the Gapminder Foundation have spoken the inaugural Global PovertyAmbassadors as part of the London launch of his Annual Letter. Hosted by the London School of Economics (LSE), Bill Gates will cover the key themes of his 2012 Annual Letter, including how innovations in agriculture and health are driving down extreme poverty worldwide.

In the 2012 Letter Bill Gate said : “Right now, just over 1 billion people—about 15 percent of the people in the world—live in extreme poverty. On most days, they worry about whether their family will have enough food to eat. There is irony in this, since most of them live and work on farms. The problem is that their farms, which tend to be just a couple acres in size, don’t produce enough food for a family to live on. Fifteen percent of the world in extreme poverty actually represents a big improvement. Fifty years ago, about 40 percent of the global population was poor.[..] The world faces a clear choice.

If we invest relatively modest amounts, many more poor farmers will be able to feed their families. If we don’t, one in seven people will continue living needlessly on the edge of starvation. My annual letter this year is an argument for making the choice to keep on helping extremely poor people build self-sufficiency. My concern is not only about farming; it applies to all the areas of global development and global health in which we work. Using the latest tools—seeds, vaccines, AIDS drugs, and contraceptives, for example—we have made impressive progress. However, if we don’t make these success stories widely known, we won’t generate the funding commitments needed to maintain progress and save lives.

At stake are the future prospects of one billion human beings.” The Global Poverty Project are running the event to mark the launch of our Global Poverty Ambassadors Initiative, supported by The Co-operative Group. This new scheme invites people from all walks of life to engage their communities in the campaign against extreme poverty. Click on the above link to learn more and apply to become a Global Poverty Ambassador. Over 100 individuals will be chosen to be Ambassador in 2012. They will be trained by leading exspert at the LSE and Edinburgh, gaining the knowledge and expertise to engage with a diverse range of communities, from students to busineses and faith groups.

The Ambassadors will became leading voice in the campaign against extreme poverty, information and inspriring their own communities to take meaningful action on behal of the poor. Becoming a Global Poverty Ambassador is a fantastic opportunity for people from all walks of life to get involved in raising awareness for the 1.4bilion people living in extreme poverty.

The Co-operative is doing more than ever to help tackle global poverty, through co-operative support, ethical trade, ethical finance and campaigning. Already their work has benefited millions of people across the developing world. The Co-operative believes that together, their members can help ensure lasting change.

And do no forget

1.4 billion people on our planet live in extreme poverty. The Global Poverty Project’s mission is to increase the number and effectiveness of people taking action to see an end to extreme poverty.