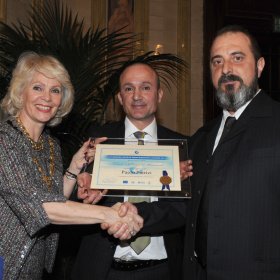 Migration stories on show in the heart of Westminster The regal surroundings of the London’s Royal Horseguards in Whitehall, was a fitting venue for Accademia Apulia’s prestigious Migration, Stories of a Journey award ceremony.

At the event, held on 10th February 2012, the respected Mayor of Westminster, Susie Burbridge, greeted the finalists and presented prizes to the worthy winners of this photography contest. Through events such as these, the non-profit organisation Accademia Apulia has successfully used art as a medium to publicise the global challenges that our cultural landscape faces in a rapidly changing world. Focusing on migration as the theme, artists from across the globe submitted breath-taking, creative works that highlighted the plights of various international communities.

Paolo Patrizi of Rome was this year’s winner and took home the € 1000 prize for his poignant, photographic portrayal of the exploitation of Nigerian women forced into prostitution by international traffickers. Patrizi’s presentation of the squalor lived in by the young girls made to sell their bodies, forms part of a wider collection which is partly exhibited at the National Portrait Gallery of London. Second and third prizes were awarded to Turkey’s Erhan Ucar and Uzbekistan’s Alexandra Polina.

Ucar’s work depicted the nomad tribes of Anatolia whose lifestyle has fallen under threat by the Uzbeck central government. Polina’s display, “house inside-out”, presents her family in a street adorned with her furniture and personal effects to demonstrate how the indoor and outdoor world of migrants often clash.

Amongst the many authorities who attended the ceremony were the Mayors of Wandsworth, Hounslow, Camden, Brent, Ealing, Lambeth, Merton, Redbridge, Richmond and Southwark. Also in attendance was the former British Minister of Migration Barbara Roche, the Italian Consul General Uberto Vanni d’Archirafi, the Director of the Italian Culture Institute Carlo Presenti and writer Naomi Grym. Tim Hancock, Director of Amnesty International Campaign, was also present as well as Clarissa Azkoul, Head of mission for the International Organisation for Migration.