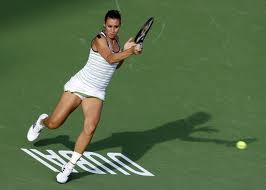 She’s probably the best female tennis player in Italy – and she’s a sex symbol too. Flavia Pennetta was born in Brindisi, Apulia, 30 years ago. She began playing tennis at the age of five, and since that day she never gave up winning. In 2009, she became Italy’s first Top Ten female singles player. During her career, she won nine WTA and sevet ITF singles titles. In four words: a lot of triumphs. And that’s not all: in 2011, she wrote her first autobiography (“Dritto al cuore” – “Straight to heart”), revealing several secrets of her private life – and selling thousands of copies in a few days, of course. Now, being at the peak of her career, Flavia Panetta is training for the Olympic Games. After conquering Italy, it’s time to conquer London: “My target? – she said – It’s very simple: I’m going to win a medal”. No doubt – here’s the word of honour.

In 2009, you became the all-times best Italian female tennis player. How did you feel?

“The emotions I felt are not easy to describe. I felt light and happy and full of energy. All the sacrifices I did had been repaid. It was incredible, amazing”.

If you wouldn’t have become a tennis player, what would have been your job?

“I played my first match when I was a kid. Playing tennis is my only passion. What can I do?”

You were born in Brindisi, then – at the very beginning of your career – you went to Rome. Now you live between Barcelona and Verbier, a little Swiss village. Where do you feel at home?

“I love big towns – for example, I’m really attached to Rome. Actually, I feel at home wherever my loved ones live. I feel at home in Brindisi, where my parents live. But also in Switzerland and in Spain, where I spend most of my time during the trainings”.

I know that a tennis ball can reach the 200 km/h. It’s like a weapon! Here’s the question: have you ever injured somebody?

“No, not really. But one time, during a match, I hit my opponent with a ball. It was just an accident and I didn’t injured her. But she got really angry…”.

You’re a sportswoman, but you also love fashion. Some time ago, you started out as a model during a show in Milan. What’s the most difficult thing – winning a tennis match or controlling the stress on the runway?

“What a difficult question! Yes, I was quite frightened – above all before the show. I was afraid to fall down and put up a poor show. Those heels were too high…”.

Describe you ideal man. Which ones do you prefer? Sportsmen or non-sportsmen?

“I’m a tennis player – and it means that I spend most of my time playing tennis, going to gym and doing my training. Meeting a sportsman is quite simple for me; meeting a non-sportsman, on the contrary, is a little more difficult. That’s my environment: I appreciate it, and I appreciate my style of life. But I’ve no bias: love is blind…”.

You have been engaged for three years with the Spanish champion Carlos Moya. It was a great love story, but finally he left you and everything finished. Many pages of your book are dedicated to this affair. Somebody says that writing could be a sort of therapy. Do you think it’s true?

“Yes, I think so. It was not easy to retrace with my mind these hard moments. But I did, and then I felt better. I got something off my chest. It was useful!”

Ok Flavia And now, let’s talk about the Olympic Games! What’s your target?

Which opponent do you fear most?

“No doubt: myself. Firstly, I’ve to overcome my fear, my limits. Then, I’ll beat anybody”.

One day, during a interview, you said: “Every year, I choose a special song. I always listen to it, every day and before every match. That song will be my soundtrack”. What about 2012? Which song have you chosen?

“Rihanna, ‘Only girl (in the World)’. But it’s not my ultimate choice”.

This is the translation of the article “Flavia cuor di leone” published on February 2012 in “Maxim Italia”.