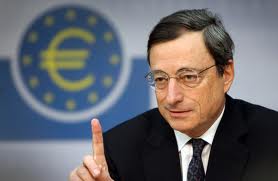 European Central Bank :The monetary analysis indicates that the underlying pace of monetary expansion remained subdued in the first four months of 2012. The annual growth rate of M3 fell to 2.5% in April, down from 3.1% in March, following strong inflows into money in the first quarter of the year.

The moderation in annual M3 growth in April was mainly driven by outflows from overnight deposits belonging to non-monetary financial intermediaries (which includes entities like central counterparties, investment funds and securitisation vehicles).

The annual growth rate of loans to the private sector (adjusted for loan sales and securitisation) declined to 0.8% in April (from 1.2% in March), owing to negative loan flows to non-monetary financial intermediaries.

At the same time, monthly flows of loans to non-financial corporations and households were moderately positive in April and the annual rates of growth (adjusted for loan sales and securitisation) stood at 0.7% and 1.5% respectively in April, broadly unchanged from March.

Question: I have two questions: first, to put it bluntly, if you are aware of the downside risks to the euro area economy and the kind of tensions that we have at the moment – which are almost in panic mode – can you tell us about the deliberations surrounding your decision not to cut rates today?

Second, can you give us a bit of a feeling, from the ECB’s point of view, as to how functional, or dysfunctional, both the interbank market and the bond market are right now?

Draghi: I will start by saying that one has to appreciate the background against which this decision was taken today. We still have very low nominal rates and negative real rates. We also have, as you said, dysfunctional markets – the interbank market is very dysfunctional, it is not working – and there is a certain amount of fragmentation in most of the other financial markets in the euro area. I am saying this because, in such a situation, price signals have a relatively limited immediate effect. It is mostly quantitative signals, quantity policy measures that would address such a situation.

Let me also give you a few reasons why, in the end, we decided to take this stance. The baseline scenario of our staff projections has not changed. At the same time, we have to acknowledge that this baseline scenario is based on assumptions, such as an abatement of financial tensions in the future and, overall an ongoing buoyancy in external demand.

After the cut-off date for these projections, which was 24 May, several soft data, such as the Purchasing Managers’ Index, orders, confidence indices, have all pointed in another direction, and it is not upward. At the same time, I have to say that, during the first quarter, the hard data pointed in the opposite direction: construction production rose by 12% in March, new orders rose by 0.5%, total export and import values went up by 3% in the first quarter and German GDP growth rebounded by 0.5% in the first quarter.

So you see; there are conflicting signals. We are fully aware that the most recent soft data point to the downside, which is why you will find several references to downside risks in the Introductory Statement. We will monitor all developments closely and we will stand ready to act.

Question: We hear that you, Mr van Rompuy, Mr Barroso and Mr Juncker are in a committee to save the euro zone and will present a master plan or a road map going forward in June. Can you tell us what your precise role on that committee is, and, are you not concerned that, by getting involved in such an extremely political process early on, you might undermine the ECB’s independence?

My second question is on Greek banks. You hinted in the European Parliament last Thursday that, after the capital injections, the Greek banks have access to your operations again. Can you confirm that all of the big banks have full access to regular ECB refis now? And, if not, where are the remaining problems?

Draghi: As regards the first question, we have been requested by the European Council to perform this role with the other institutions. I do not think that this will present any threat to the ECB’s independence. One has to see what the outcome will be. It is better to be part of the outcome, rather than outside the process. Having said that, work is now in progress: as you may all understand, it is potentially very important work and we will certainly contribute with all our skills and expertise to this work. In addition, we are all convinced that this work is, in a sense, the beginning of a process which will give substance to a European vision for the medium- and the long-term.

With regard to the Greek banks, I have said that we welcome the fact that the four Greek banks which were lacking capital have been recapitalised and, therefore, have been readmitted as counterparty to monetary policy operations.

Draghi: I think our primary mandate is maintaining price stability in the medium term. The inflation rate has been higher than 2% for some time now, due essentially, to oil prices, commodity prices and the use of indirect taxation like value added taxes. All these factors in a sense raise the rate of inflation, but we should consider that they are one-off factors: in other words, they are an adjustment in the price levels. And only if you have second-round effects or pass-through effects you can see the effects of this in the rate of inflation. But we have seen that inflationary expectations have remained firmly anchored and now they are even more anchored than they were before. So, since we run our monetary policy with a medium-term perspective, the question we have always asked ourselves is when is the inflation rate going to go down below or close to 2%? And we had repeated oil price increases in the previous months, so this profile shifted progressively to 2013. You remember that originally we said that by the end of this year we go below 2%, then we said it is going to go below 2% in the next year – now we have the first hints that this shifting might actually stop. And in fact we would not exclude it coming back.

Question: The question was what other problems would you say have to do with monetary policy?

Draghi: I think I implicitly responded to that. Our primary mandate is price stability and we think that if we achieve this objective in the medium term with all our necessary instruments we really contribute in the best possible way to growth.