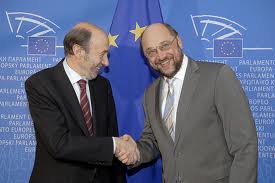 EP president Martin Schulz has called on member states to come up with concrete measures to create jobs and growth in the coming weeks to avoid Europe sinking deeper into economic and social turmoil.

Mr Schulz made the appeal in a bold speech at the informal EU summit dedicated to growth in Brussels on 23 May. He said: “In the current situation, half-hearted statements of intent are simply not enough.”

Time for action Mr Schulz pointed out that out of the 24 summits convened since the start of the crisis in October 2008, this was the first one to focus on growth. He also stressed that structural and budget consolidation measures would take too long to bear fruit.

“In the meantime, the risk is that the economic and social repercussions of austerity will tear Europe apart. For that reason, we need growth now.”

He challenged the member states to produce proposals in time for the June summit. Greece The heroic efforts already made by Greece to drastically reduce their expenses should be recognised, said Mr Schulz, who visited the country twice over the last three months. “Despite the painful sacrifices they have made, the Greeks can still see no light at the end of the tunnel.”

The EP president asked EU’s political leaders to send them a message of hope to show them their sacrifices have not been in vain and that we are finally moving in the right direction again.

At the same time, he also warned Greek political parties against thinking they would be able to remain in the eurozone and receive aid without sticking to agreed debt repayments and structural reforms.

Giving hope to the young President Schulz also called attention to the plight of Europe‘s five million unemployed young people and said specific measures such as apprenticeships are needed to help them.

“We are failing to exploit the potential of the best-educated generation our continent has ever had!” He went on to say that what young people in Europe need today is hope. “This generation is the future of Europe! It is our task to give them a future.” He also cited from a number of messages he had received from young people about the difficulties they were experiencing in response to his appeal about this on Facebook.

The way forward For measures to lift Europe out of the crisis, member states should draw inspiration from the practical proposals already put forward by the European Parliament, said Mr Schulz. Its report uncovered the potential of ideas such as project bonds to modernise EU infrastructure and invest in green technologies, the introduction of a financial transaction tax, adding new financing instruments and increasing the European Investment Bank’s lending capacity by more than €10 billion.

The EP president also underlined that the EU budget is an investment budget: every euro of public money generates up to four euros of private investment.

Mr Schulz also proposed a pact among the EU institutions to work out consensual measures over the next 12 months. The Council, Commission and the Parliament could then take every possible short-term measure to stimulate growth, create jobs, put an end to the credit squeeze and introduce fair tax systems.