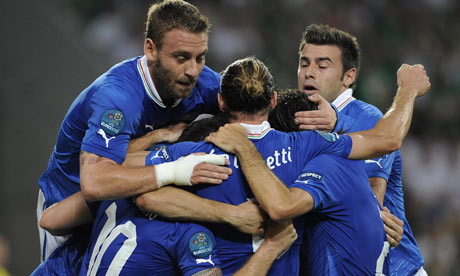 “No doubt, it was a difficult match. We suffered a lot – but we won. There’s nothing more to say: that’s football!” Finally, Cesare Prandelli, the manager of the Italian football team, can sigh with relief.

Beating the Irish team (whose coach is Italian too – his name is Giovanni Trapattoni and he leaded the Italian team since 2000 until 2004), the “Azzurri” qualified to the quarter-final of Uefa Euro 2012. They won, but it was not a overwhelming victory. [

On the contrary, Mr Prandelli’s boys had to work hard for more than 30 minutes till Antonio Cassano, with a fantastic header, beat the Irish goalkeeper, giving new hopes to his team-mate.

The second goal – a little masterpiece – was scored during the restart by Mario Balotelli. In the meantime, Spain beat Croatia (1-0), allowing Italy to reach the second place in the ranking of Group C.

The so-dreaded “biscuit” – Spain-Croatia 2-2, they both qualify and Italy‘s out – didn’t take place, despite several Italian sports commentators assured that it would have done. It was a sweet surprise.

In fact, speaking with the journalists at the end of the match, Gigi Buffon, the Italian goalkeeper, said: “Thank you Spain!”

Now, after one victory and two ties, Mr Prandelli has no choice: he has to show what he’s made of. “The next match would be very hard – he said -. We have to give our best, playing with our heart. It would be difficult, I know.

But we’ll overcome: here’s my promise!” Italy is going to meet the Group D winner – that is to say, England, France or Ukraine. The match will take place on Sunday in Kiev.

“The best opponent? There’s no difference to us – as Prandelli said – We have already played Spain who are reigning world and European champions. If we play well we can take on anyone”.

Here are Prandelli’s promises – and now Italy’s waiting for the facts.