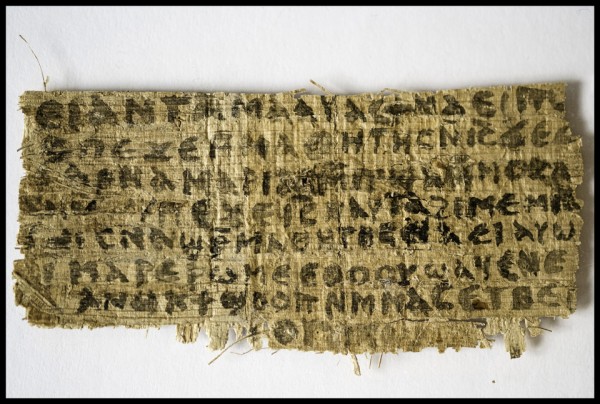 In the fragmentary text, Jesus refers unmistakably to “my wife. Here’s the fragment (one of nine incomplete lines on the papyrus) that has everyone elbowing Christ in the ribs and arching their eyebrows at him: “…Jesus said to them, ‘My wife…'”

Karen L. King, a professor of divinity from Harvard, who tells Harvard Magazine she received it from a collector who wishes to remain anonymous. She said is the only existing ancient text quoting Jesus explicitly referring to having a wife.The paper will appear in the January 2013 issue of the Harvard Theological Review. In an interview, King emphasized that this new discovery does not prove that the historical Jesus was married.

This gospel, like others dated to the second century which make opposing claims—that Jesus was celibate, for example—are too late, historically speaking, to provide any evidence as to whether the historical Jesus was married or not, she says.

According to Harvard Magazine, the fragment’s current owner is a collector of Coptic (and Greek and Arabic) papyri, who approached Professor King to translate the text because he does not read Coptic, but merely collects priceless, irreplaceable scraps of ancient papyrus records for funsies.

King also sought the expert opinion of Ariel Shisha-Halevy, an expert in Coptic linguistics at Hebrew University, who wrote that he believes on the basis of language and grammar that the text is authentic: “That is to say, all of its noteworthy grammatical features either separately or conjointly do not warrant condemning it as a forgery.” The letter forms, however, are inconsistent.

This is not “the hand of a well-trained literary scribe,” King acknowledges. “Our best explanation for this is that the scribe has a nubby pen from which the ink doesn’t flow consistently.”