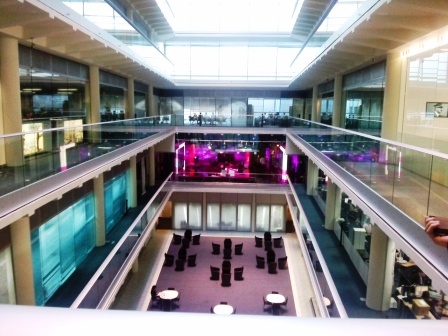 Interview of a Bureau’s journalist

On Friday 12th of October we had the pleasure of meeting Federico Gatti,a famous Italian journalist who graduated in International Comumunication and the only Italian journalist who works in a no-profit organization, the BJI(Bureau Journalism Investigation) in London. He allowed us to interview him regarding his working experience.

BJI wants educate the world to the value of honest (www.thebureauinvestigatives.com/who/.) Gatti is known at the Bureau for his inquires into frauds of the European structural funds.

That,let him enforce the Thompson Reuters Reporting Europe Prize, one of most prestigious Journalism prizes. For most of the people,thanks to his excellent Journalistic qualities, he is one of the candidates for the leadership of “The Times”.

Mr.Gatti showed up at the Channel 4 and Mediaset’s studios and told us how he became a Journalist and he gave some advice how to become a great one. Besides According him a journalist must be, curious,tenacious and bold.

A good Journalist must tell the truth and this kind of Journalism could save the world. After that we got the opportunity to ask him some questions:

Then, I was a freelance and I was free to tell stories. My working life was a long journey from local problems to global journalism.When I graduated, I moved to London, and after a week the BJI employed me.

We are young journalists,what kind of advice could you give us? “I have learned from my own experience. The most important advice is to have an excellent approach in the world of journalism. Also you have to be curious about everything happening around you, because even the smallest thing can have, beyond it, a big story to tell to the people.

The third advice is to persist: if your boss doesn’t like your article, you have to keep writing until you receive a “Yes”. The last advice is never give up and persist always.”

Also the investigative news are more serious than report ones. When a journalist has to make an investigation he needs to get inside the story, live it and write more, so it’s difficult but for me it is the most beautiful , rewarding work for a journalist.”

Who do we have to pay for newspapers? The money given by the state will never be enough to run a journal,however as a state I would never give money,because I don’t want other people to give information from their point of view. The editorials earn a lot of money from advertisement and it’s up to them to attract readers. I think to pay for newspapers is fair but unfair too, because,as a common person,I would pay the same sum of money for all newspapers, but unfair because we can’t pay the same sum of money for newspapers that talk about significant facts and others that talk about gossip and useless facts. Journals have to be run with competitiveness.

What is the importance of journalism today? “I think that if journalism is used in a good way,it can change the world. Journalism can open the eyes, it tells people the truth,about problems that normally they don’t care about. Sometimes journalists can adopt a bad form of journalism, like writing something about useless facts such as gossip news.

This kind of news turns people away from societys real problems. I want to make good journalism,digging inside the news, reporting simply the truth.”