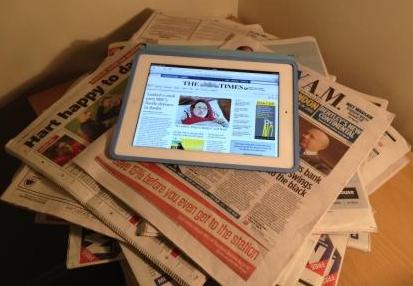 “Reading the morning newspaper is the realist’s morning prayer” Hegel

Journalism is what people need to know the truth; in fact it provides daily news from all over the world about different subjects. Journalism has recently changed; news is not only printed on paper but they are now diffused thanks to the internet and television.

But what do people really think about them? Our inquiry is based on this important question. Interviewing the British public in and around London, we had the chance to hear their thoughts (or opinions), by asking simple questions: Do you think English journalism is independent? Do you think that journalism involves young people? Which kind of newspaper do you prefer: online or paper version?

It was possible to conclude that they are overall happy with English journalism because it is independent. Although sometimes it can seem influenced by politics and powerful men. People mostly prefer the paper version as they can have direct ‘physical’ contact with the news.

However the online version of newspapers are very popular with young people.

They use the internet to link up with the world and also they don’t like having to pay for newspapers because they have all that information on their Tablets or Smartphone.

From our inquiries we discovered that a lot of people quickly read the Free Newspapers on the underground whilst they are going to work. But they only read a few articles then leave the newspapers on the tube.

This came out of our inquiries, in fact some people interviewed focused on the ecological problem, that it is also an economic problem: The wastefulness of paper that is paid for by their taxes.

Another important fact that came out of our inquiry is that for the majority of the British population they think that politics influences journalism, so newspapers are not independent. Moreover we went into some colleges and we put the same questions to young people and we discovered that they prefer online newspapers because they are easier and cheaper to consult.

*The Paper or web?

A lot of people prefer to switch on the TV or the radio to listen to the news, sparing themselves the effort of having to read. Other people instead find the news on the computer, thereby avoiding buying an “expensive” newspaper in the morning [read more]

*What the British think about journalism, politics and involvement of the young

After asking British passers-by in London questions about journalism and politics, we collated their different feelings and impressions, we’ll show the results of our survey using the pie charts below.• Do you think that English journalism is independent? As you can read from the pie chart most of those interviewed considers English journalism to be independent, about 1/3 of them think that journalistic autonomy depends on the different journals whilst over 26% think not.[Read more]

In conclusion, for the most part, the British public (42%) thinks that journalism is already independent, but others (26%) say that it isn’t really free from political influences. [Read more]