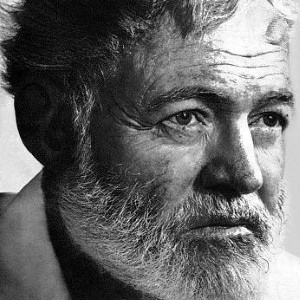 Discovered after ninety years, although the Italians have not yet to read it. A short story that Ernest Hemingway the nineteen year old soldier-journalist, volunteer for the American Red Cross on the front during the First World War, wrote in Taormina (Sicily) during a convalescence holiday, between late 1918 and early 1919. The war ended on 11 November and the “soldier Ernest” had successfully completed a long stay in a military hospital for serious injuries to his leg whilst he lent assistance to a wounded soldier. Completely cured, he had to rehabilitate his joint with long walks and Taormina was the ideal place to do so.

It is the first story (in actual fact) of the writer who 35 years later, in 1954, received the Nobel Prize for literature. And it is a paradox (one of the many paradoxes that characterize the life of the great Hemingway) that the debut work of a writer so important has only now appeared 68 years later in a library, in 1987, when he had been dead for 26 years (suicide at age 62, in 1961). This is one of the so-called short stories (“The Mercenaries”, the title in English), published by the biographer Peter Griffin, in collaboration with the son of the writer, Jack Hemingway, along with four other stories as an attachment to the first volume of the biography of Griffin, “Along with Youth: Hemingway, the Early Years”, published by Oxford University Press (the other four are unpublished “Crossroads”, “the Ash-Heel ‘s Tendon,” “The Current”, “The Portrait of the Idealist in love “).

The Italian journalist Gaetano Saglimbeni, former editor and correspondent for the weekly “Gente” tells the intriguing story in his book “Taormina: The History, The Sins, The Great Loves,” published by Publishers La Rocca and Sicily Artistic (pp. 272, € 16)) of this tale ignored for many years by Hemingway’s biographers. “At Taormina, the nineteen year old Hemingway,” says Saglimbeni, was the guest of the Duke of Bronte in a splendid villa halfway up a hill that on one side has Mt.Etna and the sea of Naxos and the other the enchanting bay of Isola Bella (beautiful Island). Also present were two great friends of the duke, a captain and a colonel from the U.S. Army, James Gamble and Tom Bartley, who too had been at the front with the Red Cross volunteers.

Alexandre Nelson-Hood was at the time Duke of Bronte, 65, a great-grandson of the famous British Admiral Horatio Nelson, who had been given as a gift the rich duchy, the slopes of Mt. Etna by Ferdinand I of Bourbon, King of the Two Sicilies, for saving his life during a popular uprising in Naples. A great host, “charming and generous aristocratic” (words of Hemingway), intelligent and refined, highly cultured and with vast interests; he transformed his charming and comfortable villa in Taormina into a sort of “retreat” for artists and writers (among the guests, TS Eliot, David H. Lawrence, Somerset Maugham, Gabriele d’Annunzio”). “

After the horrors of war, the convalescing soldier Hemingway spent two edifying weeks just resting. As Journalist of the “Star” of Kansas City, with his adventurous spirit, gained from his early childhood, he was used to the dramas of life (he accompanied his father a doctor on his many visits to the most desperate cases in Illinois, where he was born, and Michigan, where he lived for many years) .

As a volunteer of the Red Cross, the eighteen year old Ernest refused to work in logistics services which at first he had been assigned: war (“the most sordid and cruel slaughter of the world”, as he described it), the Journalist Hemingway wanted to “look it in the face,” to live on the front line trenches in order to tell the readers of his newspaper.

Assigned to drive the ambulance that went to collect the wounded at the front, he was wounded in the leg by shrapnel from a grenade in July 1918. The soldier who he had gone out to save was much more serious as the splinters had pierced his chest. Ernest, whilst limping from the wound, took him up on his shoulders to reach the ambulance parked at a distance, but after fifty yards two machine-gun bullets smashed the already injured the knee of the leg. He still managed to drag himself for another hundred meters, with the soldier on his shoulder, before fainting.

Fortunately the rescue workers arrived. Both were transferred to a field hospital near Treviso and five days later he was moved to an old villa in Brianza. And in that place of misery, love blossomed between the journalist-soldier and the nurse, Agnes von Kurowsky, who was eight years older than him, the daughter of a German baron who had emigrated to America. A love story that became famous throughout the world with her novel, “A Farewell to Arms”, (written by Hemingway in 1929, eleven years later) and the feature film, in 1932 with Gary Cooper and Helen Hayes in 1957 with Rock Hudson and Jennifer Jones.

It was a very special period, for the young soldier-journalist and aspiring writer Hemingway recovering at Taormina. In the morning, long walks “to the picturesque lanes, between old houses with stone walls semi-covered by bougainvillea, avenues that opened onto lemon and orange groves, hills covered by the dark green of the olive trees, in front the colour of the sea, shifting from ‘sky blue to blue, to purple, “and in the evening, until late at night, to” admire the spectacle of the bay of Naxos by the light of the moon, with the smoking Etna that towered above it, imposing and beautiful.

There was always cheerful company at the table, with a cuisine of “strong flavours” and maybe even more so than those the writer Hemingway exalts in his ‘Cuba Ed’. The famous sweets of Taormina, with wine from Etna “robust and fragrant” “with inside the fire of the volcano and the sun of Sicily” as was pleasing to the “great drinker” Hemingway.
We ask Saglimbeni, “What does the nineteen year old Hemingway short story written in Taormina” tell us. “The wines and cuisine, traditions and landscapes of Taormina in the early years of the twentieth century, a place that was a large village of farmers and fishermen,” explains the journalist Saglimbeni. “And a gun duel for the beautiful eyes of a woman that took place in the garden of a restaurant, between two protagonists, a mercenary American captain who had lived an adventurous life, he had fought on several continents and emerged victorious from a lot of the bloodiest battles, and a pilot of the Italian Air Force, much younger than he, who had distinguished himself in the first World War”.

It is this same captain in a bar in Chicago who tells this story to a handful of his colleagues, proud of having fought in a duel “for reasons of honour”, to defend his own dignity and that of the woman with whom he had dined in a restaurant. A bewitching Sicilian “dark eyes and full red lips”, whom he had met on the train travelling from Rome to Taormina (the lady had got on at Messina) and had been invited to dinner, that same day. Of course it was a romantic candlelit dinner.
Saglimbeni continues, “Sitting with friends at the next table,” “there was a military aircraft pilot of irresistibly charm, callous and brazen, ready to spoil the pleasant meeting. After one glance too many at the beautiful lady, a compliment that bordered on impudence, there followed the inevitable reaction of her companion, to whom the intruder replied boldly with a challenge to a duel, readily accepted by the captain.

The fight took place a little later in the restaurant garden, in front of the lady now in tears whilst one of the waiters was given the task of calling out ‘one, two, three’ for the swift turnaround of the two duellists and the opening of fire. According to the captain’s story, the pilot did not wait for the ‘three’ but turned and shot, he missed the target, and the captain, immediately shooting, hit him in the hand. In the quiet years of Taormina “These episodes took place, because of guests in the mood for pranks.

A short story, which takes up just five and a half pages of Griffin’s book, “but with such charm,” Saglimbeni observes, “this cannot be and is clearly not the only the work of onset of a future Nobel Prize for literature.” A story that clearly anticipates the adventurous spirit, narrative style, the personal characteristics and also the thematic lines of the best novels of the great Hemingway.

“And ‘this is also the opinion of American Professor, Mimi Reisel Gladstein, careful scholar of hemingway’s work: “There is everything in these pages, of Hemingway’s maturity.”

“I am only sorry”, concludes Saglimbeni, “that these taormines pages of the great Hemingway, written in the weeks between the end of 1918 and 1919 and published 68 years later, were never translated into Italian, and (what is even worse) do not even exist in the English language in Italian bookstore.