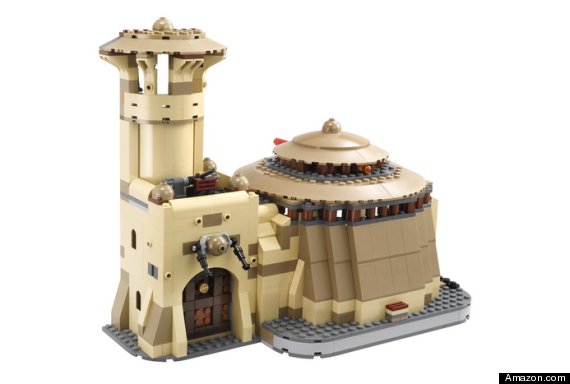 Racism is a phenomenon we should fight harshly and constantly. But what would you say if somebody ask you whether you think the toy above depicted has a racist content?
That’s a LEGO’s rendition of “Jabba’s Palace”, as in Jabba the Hutt, the gross alien slug that is a character of Star Wars: Return of the Jedi.

According to the Turkish Cultural Community of Austria (TCCA) it would contain also a sly racial meaning, a prejudice against Muslims, because that toy set would resemble the Hagia Sophia in Istanbul and the 7th century Jami’ al-Kabir mosque in Beirut. These structures, which are revered by Muslims, are some of the most important symbols for Islam.
The TCCA’s text which caused such a fuss in January was titled “LEGO: Educational explosives for children?” and its first lines, according to a Google Translate version of the page (originally in German), claimed:
« The Turkish culture community in Austria takes the Danish manufacturer LEGO games in Germany, Austria and Turkey because of hate speech or incitement to a statement of facts. Subject: LEGO Star Wars 9516 – Jabba’s Palace. The missiles, guns, and weapons such as laser guns, guns and samurai swords and trapdoors in the LEGO castle are for the Turkish Culture educational community in Austria questionable, even “educational explosives”. »
Moreover TCCA wrote:
« It is clear that the figure of the ugly villain Jabba and the whole scene (exemplifies) racial prejudice and vulgar insinuations against … Orientals and Asians as sneaky and criminal personalities (slaveholders, leaders of criminal organizations, terrorists, criminals, murderers, human sacrifice)… »

In fact, a picture showed in their site tried to demonstrate their thesis linking the LEGO toy set’s box accused with the image of the Hagia Sofia through a series of arrows pointing the similarities between the two items.

However LEGO’s actual toy description sounded innocuous enough:
« Rescue Han Solo from Jabba the Hutt’s desert palace! Avoid the trap door and roof-mounted missles to free Han Solo from Jabba’s Palace, with poseable Jabba and all-new Salacious Crumb ».
Nevertheless it seems the toy’s demise is now at hand: LEGO says it plans to retire Jabba’s Palace, leading some to conclude the company’s caving to backlash. Not so, says LEGO in an Apr. 2 statement:
« A few media have reported that the product is being discontinued due to the mentioned criticism. This is, however, not correct … As a normal process products in the LEGO Star Wars assortment usually have a life-cycle of one to three years after which they leave the assortment and may be renewed after some years. The LEGO Star Wars product Jabba’s Palace 9516 was planned from the beginning to be in the assortment only until the end of 2013 as new exciting models from the Star Wars universe will follow. »

But the TCCA seems to be greeting the move with celebratory rhetoric: « We are very grateful and congratulate Lego on the decision to take Jabba’s Palace out of production » said TCCA president Birol Killic.
Despite LEGO’s denial that the toy’s removal is backlash-related, it devotes most of its statement to defending the toy as creatively anodyne, noting that it “regrets that the product has caused the members of the Turkish cultural community to interpret [the toy] wrongly, but … the design of the product only refers to the fictional content of the Star Wars saga.”
Whether this toy set is offensive for Muslims is really hard to say. If we implemented those strict parameters to every single toy in commerce, just few would be completely exempt to touch some sensibility. Besides, TCCA should check its aim: LEGO Jabba’s Palace is based on the detailed sets and backdrops created for Return of the Jedi, after all. Whatever George Lucas was channeling in the original design, the palace, the tower and Jabba himself have been around for decades.