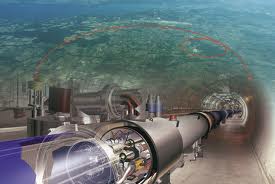 At a special meeting hosted by the European Commission in Brussels today, the CERN Council* formally adopted an update to the European strategy for particle physics. Since the original European strategy was put in place in 2006, particle physics has made considerable progress in elucidating the laws of nature at the most fundamental level. CERN’s Large Hadron Collider (LHC) has begun routine operation, producing its first major results, and the global particle physics landscape has evolved. The updated strategy takes these changes into account, charting a leading role for Europe in this increasingly globalised endeavour.
“The strategy we have adopted today recognizes Europe’s strength in depth in particle physics,” said President of the CERN Council, Agnieszka Zalewska. “Europe’s success is built on strong universities and strong national communities working constructively together and coordinating their efforts through the strong European focal point of CERN.”
A very important issue for the strategy is preserving and building on the European model for cross-border research. CERN, in close collaboration with research institutions in the CERN Member States and under the guidance of the CERN Council, will coordinate future European engagement with global particle physics projects in other regions. The strategy notes that cross-border collaboration in science, as exemplified by the CERN model, pays dividends for Europe in terms of knowledge, innovation, education and training.

Key points of the strategy are that Europe, and the European particle physics community, should:
– Exploit its current world-leading facility for particle physics, the LHC, to its full potential over a period of many years, with a series of planned upgrades;
– Continue to develop novel techniques leading to ambitious future accelerator projects on a global scale;
– Be open to engagement in a range of unique basic physics research projects alongside the LHC;
– Be open to collaboration in particle physics projects beyond the European region;
– Maintain a healthy base in fundamental physics research, with universities and national laboratories contributing to a strong European focus through CERN;
– Continue to invest substantial effort in communication, education and outreach to engage global publics with science.

Created in 1954, the European Organization for Nuclear Research (CERN) is governed by the CERN Council. The CERN laboratory near Geneva, which has evolved into a leading example of successful collaboration among nations, is host to a scientific community of over 11000 users representing 100 nationalities. It has made significant contributions to our understanding of the Universe, most recently with the discovery of Higgs bosons, brought major contributions to technological innovation in fields as diverse as medical imaging and information technology, and it has given us the World Wide Web.