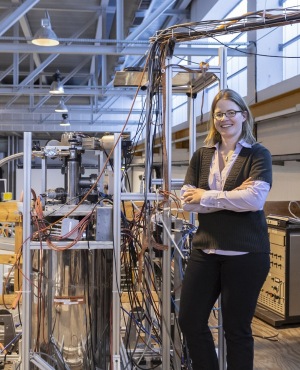 The ISOLTRAP collaboration* has measured the mass of exotic calcium nuclei using a new instrument installed at the ISOLDE facility at CERN. The measurements, published on 20 June in the journal Nature, clearly establish a new “magic number” related to the stability of this exotic species. The results cast light on how nuclei can be described in terms of the fundamental strong force.

“This measurement from a classic ISOLDE low-energy experiment complements well recent key results on radon, observed by post-accelerated beams, and on astatine, observed at the source with lasers,” said CERN’s Director-General, Rolf Heuer. “It demonstrates beautifully that ISOLDE has a wealth of tools for producing exciting physics.”
The results strengthen the prominence in calcium isotopes of a magic number that was not foreseen in the original “nuclear shell model”, for which Maria Goeppert-Mayer and Hans Jensen received the Nobel Prize in 1963, exactly 50 years ago. In this model, the protons and neutrons in a nucleus arrange themselves in “shells” similar to those of electrons in atoms. The magic numbers correspond to full nuclear shells, in which the constituents are more tightly bound, leading to more stability and lighter masses.
The ISOLTRAP team used the ISOLDE facility to make exotic isotopes of calcium, which has the magic number of 20 protons in a closed shell. Their goal was to find out how the shell structure evolves with increasing numbers of neutrons. Standard calcium with 20 neutrons is doubly magic, and a rare long-lived isotope has 28 neutrons – another magic number.
Now, the ISOLTRAP team has determined the masses of calcium isotopes all the way to calcium-54, which has 34 neutrons in addition to the 20 protons. The measurements not only reveal a new magic number, 32, but also pin down nuclear interactions in exotic neutron-rich nuclei.
“With a shell strength of about 4 MeV, the new finding for calcium-52 rivals that of classic magic numbers,” said Klaus Blaum of the Max Planck Institute for Nuclear Physics, Heidelberg, Germany, and spokesperson of the ISOLTRAP collaboration.
The exciting measurements were made possible by the integration of a new type of device into the ISOLTRAP experiment: using two electrostatic mirrors, it allows the separation of ions according to their mass with unprecedented accuracy, by measuring their time of flight over a distance of up to several kilometres.
“While we have already applied the multi-reflection time-of-flight device as a mass separator, this is its first use as a mass spectrometer – that is, to weigh an exotic nucleus,” said Frank Wienholtz, a doctoral student at Ernst-Moritz-Arndt University, Greifswald, Germany, and lead author of the Nature paper.
Together with the mass measurements, the article reports predictions from physicists at the Technical University of Darmstadt, using state-of-the-art theory that includes three-body forces. Calcium is the heaviest isotopic chain for which three-nucleon forces, based on an effective field theory of quantum chromodynamics (the theory that describes the strong force), have been applied. The ISOLTRAP results are in excellent agreement with the theoretical calculations, and they show that a description of extreme neutron-rich nuclei can be closely connected to a deeper understanding of nuclear forces.