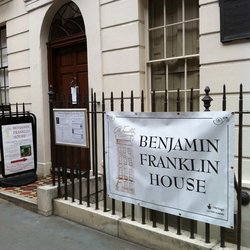 Benjamin Franklin (1706-1790) did a lot of things during his life. He was an inventor, scientist, journalist, writer, musician, economist, diplomat and philosopher. Franklin invented the lightning rod and bifocals, he studied the Gulf Stream and he was even the creator of daylight saving time. He is also one of the Founding Fathers of the United States of America, his greatest invention, which earned him a place on the hundred dollar bill.

During all this, he also had time to live in London, at 36 Craven Street. Now there you can visit the world’s only remaining home of Benjamin Franklin. It was opened to the public for the first time on 17 January 2006, Ben Franklin’s 300th birthday, as a dynamic museum and educational facility encompassing.

To discover more about the house and its famous tenant, Italoeuropeo interviewed Stephen Wilson, the Education Manager of the Benjamin Franklin House.

Benjamin Franklin was a very polihedric man. If you have to summarize his life and personality in a sentence, what will you say?

That is hard, because he did so many different things and he had so many ideas. I will say that he was a curious person, who wanted to help people.

Can you tell me some anecdote that happened in this house?

Well, there is this popular story which demonstrate that even if Benjamin Frannklin had wonderfull ideas,  this story shows that not all of his ideas were good. Most of his ideas were excellent and very helpful.. He was very early for his time and he saw the importance of personal hygiene. So he invented what he called the “air bath”. It was basically standing in front of an opened window with no clothes on and let the air wash all over him. I don’t think that he actually did it to be cleaner, but I deem that he believed it was good for him. You can imagine, there were a lot of neighbors that could see what he was doing. Apparently one day a menials who works in this home walked on him having his air bath by the window and…she fainted at the sight!

What is the popular feeling about Benjamin Franklin?

He is very popular, in particular between the Americans becuase he was one of the Founding Fathers of the United States. In fact 1776 he was appointed a member of the Committee of Five that drafted the Declaration of Independence and in 1787 he participated in the meetings in which it was drafted the American Constitution. Certainly he was one of the architects of the democracy in the United States. So, as you can guess, Americans adore him. British visitors are the second largest group. In general I think that after the visit everyone has a lot respect for what he did.

What kind of activity do you propose in the house-museum?

For adults we offer what we call the “historical experience”, which is a piece of theatre. This performance uses the historic spaces where so much took place as stage, blending acting, sound, lighting and visual projection to tell the important story of Franklin’s London years in his words. An actress plays the part of Polly Hewson, daughter of Franklin’s landlady. She is a central character and her performance is very interactive: the visitors follow the actress from one room to the next, discovering different aspects of Benjamin Franklin’s life in this house.

Every Tuesday we propose free activity for school groups. Our actress in costume takes the children around the house telling some funny story and answering questions.
We also have a demonstration room, in which the student can explore how the enquiries of Franklin led to amazing inventions.
Besides we have some interactive games which the children can play in the Discovery Room and in the Medical History Room.

What are the future programs of the Benjamin Franklin House?

We are planning many events for adults and kids.
For example a Debate Competition for upper secondary school students, in collaboration with the US Embassy London, family days during the school holidays, lectures and talks like the annual Robert H. Smith lecture at the British Library in May.

It is almost impossible not to be inspired by a man like Franklin, bacause, as the old Ben wrote: If you would not be forgotten as soon as you are dead, either write something worth reading or do things worth writing.