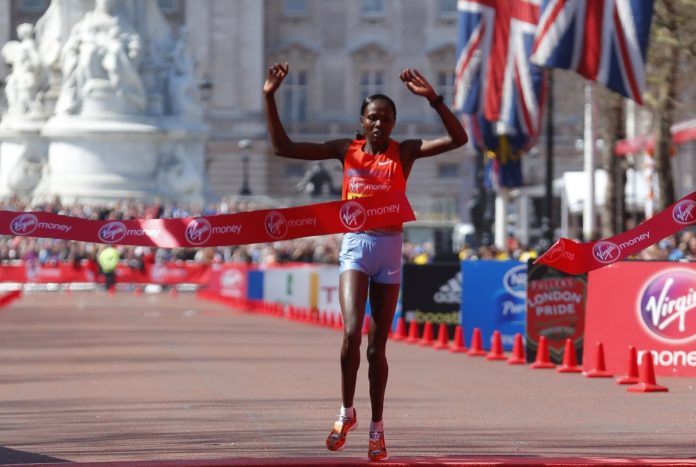 On the last Sunday (23th April) took place in London the annual event of the marathon, one of the five marathons of the World Marathon Majors along with those of Berlin, Boston, New York and Chicago, which in 2013 has seen lined up at the starting approximately 36000 runners! The great sunny day has attracted a massive crowd of people. People were waiting for the departure in London Bridge since the early morning, while many others arrived later. This year about the same number of the last year took part at the competition that, like usually, crossed the city until the finish in St. James Park.

The marathon is certainly the most important athletic specialty since his origins. The name is from the Greek town of Marathon, where a messenger arrived from Athens to announce the victory of the Greeks over the Persians. 42 km and 195 meters -that is the distance between Athens and Marathon- has remained as the distance of the competition.
This year the favorite athlete was the British Mo Farah’s, but his dream of winning his first London Marathon was dashed by tiredness. Men’s race winner, the Kenyan Wilson Kipsang, set a new course record of 02:04:29, while women’s race winner , the Kenyan Edna Kiplagat, finished in 02:20:21.
But the marathon is not just an agonistic competition for professional athletes. For the majority of people is a passion, or an occasion to measure themselves with their own possibilities, in each case, to withstand all the race, a strong preparation is required. But for many others is also a way to spend a joyful day in an atmosphere of general happiness. Parents with their babies, owners with dogs, couples running holding hands are usual scenes.
The marathon has been also a parade of oddities with people dressed with crazy costumes; many of them, according to Guinnes of Records have set new records. For example, the runner dressed as toilet or the man and the woman in a wedding dress; but there are more: telephone box, animal costumes, cowboy, astronaut are just some of the bizarre disguises that made the London Marathon a little and funny carnival.
During the race there have been also sweet moments: a 25-years-old man, after running more than 26.2 miles proposes to his girlfriend who was supporting him from the sidelines with the family. Like in each happy ending, she burst into tears and definitely said yes.
Lastly, the marathon has also been a great occasion to collect money for many charities or associations engaged in research. The organization has been impeccable and people walking in Londoners streets at the end of the day, had the satisfaction of an amazing day.