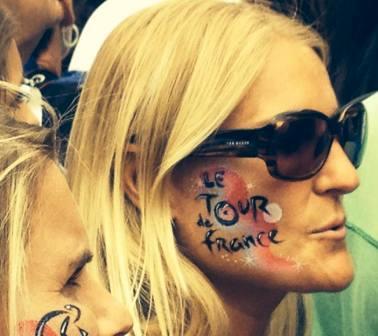 There is a Big blue cock erected on fourth plinth in London’s Trafalgar Square. As we know this is a French symbol and so seems to have been made just to say welcome to the third stage of the Tour de France in London. Before the arrival of cyclists in Buckingham Palace the race was shown on giant screens in the crowded square. The third stage in London was of 96 miles from Cambridge and it finished at 4pm and the route included the Olympic Park, Tower of London, Houses of Parliament and Buckingham Palace. Although there were a lot of people, about thousands of people, there were not riots or problems, like as declared two Scotland Yard ‘s agents. There were many hundreds of thousands of spectators, a global TV audience and an atmosphere of celebration.

The Tour de France has blocked the cityThe Tour de France has blocked the city road and tube closures after the 10 am. We have asked to the people about the transport situation.
Did you have some problems with the underground or the buses to come here?
Taylor, from London, a security worker in Trafalgar Square, says, “yes, some problems, because the central roads are closed”. Felicia, from Canada, and Anicla, from London, declare that she have take the underground without problems.

But in this day a good alternative to underground was the bicycle. In Trafalgar Square the Transport of London staff couldn’t miss. We have interviewed Christine, the Tfl cycle manager. This stand was wanted by the mayor of London because he wants cycling to become an integral part of the transport network. Christine declares that today the Londiners are a riders’ community. With more than 10,000 bikes at over 700 docking stations you will never be far from one of them and Tfl has recently expanded. There are some important initiatives promoted by the Tfl and one of these is Tfl Cycle Challenge. It is a series of free competitions running between June and September. You can register on tfl.gov.uk/cyclechallenge and you can take place in the free Tfl Workplace Cycle Challenge. In the stand in Trafalgar Square Londiners could write the motivation for which they take the bicycle in the city, and a lot of people wrote that they use the cycle to save money and time or because it is faster. In the square the Tfl also gave some indications about a cycling safely and securely.

Also the business had an important role in this race. In Trafalgar Square there were a lot of sponsor, they exhorted the people to buy. There were Oakley store, that sells sunglasses for the riders, Skoda that has been an official partner and the Tour the France official store that has a little stand where you could buy a little keychain for 8 pounds, or a yellow hat for 18 pounds.

In Trafalgar Square people waited the coming before moving to the Mall. Some people were tourists, like Felicia, from Canada, “I’m a tourist, but this is an important event in London, so I have to take some pictures”, she says. We have asked people in this square about the sensations, the transport’s difficulties and why they are here. Marian, from Birmingham declares “ I don’t like the cycling but my husband loves this race so I’m here for him. Although I don’t love the cycling I’m astonished, for me it is a surprise, because this city has created a great event today. This is amazing.” Pier, from France, says “ I’m in London because I have to improve my English and I would like to see the city but this race stage is important and I cannot lose it. “ So many people were in London because they are nuts about cycling, like Paul, from England, “ I love the races, the cycling, all the sports. This is a fantastic event, the people will remember it.” Lizzie, from London, says “ Oh I’m so exited for this Tour. The atmosphere here is amazing.”

We have also asked : Who will be the winner in this third stage?
Carlos, a Spanish guy, thinks that the winner will be Marcel Kittel. “He is the best”, declares. Also Paul, from Bistol, wants Kittel to win. Taylor, says, “I don’t know, but I hope will win an English rider.”
Never a forecast was so right.

A curiosity : do you know why has the Tour the France a yellow jersey? In 1919, Henri Desgrange, the editor of an important sport journal, “the Autovelo, introduced the yellow jersey in honor of “the Autovelo”, in effect the journal was printed on yellow paper, and also the spectators of the Tour could recognise the leader.