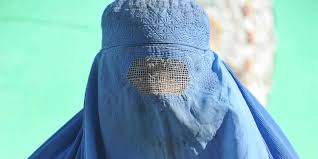 niquab-The veil in the Oriental tradition.

– The veil in the European countries. – The veil like a woman’s chose. In the Qur’an women are admonished to cover their heads and to pull their coverings over their bosoms . In chapter 33, verse 60 of the Holy Qur’an and in chapter 24 verse 32 Allah says that the women should pull down upon them of their outer cloaks and they display not their beauty or their embellishment and their private parts. In light of these sentences some women choose to cover the faces or to cover the heads only. So there are different interpretations, both of which are valid. The Niqaab covers the face and the head with the eyes showing.

The Burqa covers the face, the head and the body, the woman can see from a gauze over the eye area. The Hijabcovers the head and the neck only. So, the style of veil varies according to the situation and to the culture. [continue here]- Written by Susanna Trino italoeuropeoHits: 248

A LIFE BEHIND A VAIL

A lot of different uses exist in the world. One of these is Burqa. Many times we heard about this
topic and we will heard in the future probably as well.Someone ignores it isn’t a religion imposition
but a cultural interpretation of religion.The Qur’an, indeed, doesn’t impose to cover also the eyes.(”
— Qur’an, Surah 33 (Al-Ahzab), Verse 59 :”And say to the faithful women to lower their gazes, and
to guard their private parts, and not to display their beauty except what is apparent of it, and to
extend their headcoverings (khimars) to cover their bosoms (jaybs), and not to display their beauty
except to their husbands, or their fathers, or their husband’s fathers, or their sons, or their
husband’s sons, or their brothers, or their brothers’ sons, or their sisters’ sons, or their womenfolk,
or what their right hands rule (slaves), or the followers from the men who do not feel sexual desire,
or the small children to whom the nakedness of women is not apparent, and not to strike their feet
(on the ground) so as to make known what they hide of their adornments. And turn in repentance
to Allah together, O you the faithful, in order that you are successful”). So women suffer a strict
interpretation just for a cultural vision. But not all Muslim women. Some of them wear the burqa
such as personal and free choice. But is it possible?is a Muslim woman really free to make a
similar choice?

The Pakistan women and men compare each other. London- Schaista, from Pakistan, talked with us about a traditional wear in her country, the Hijad. She also told us about the women’s condition, the relationships between man and woman and about the Qur’an .

The Qur’an tells nothing about the duty to wear the Hijab for the women, so how did this obligation develop in your country? It was developed from the necessity to return to be modest, she told us. When someone created the humans and the world all men were naked, they didn’t need a lot of things, but now it’s different, with the society development the people have more things, and more things we have, more things we want. For this reason we search the modesty.

The Qur’an doesn’t talk about the duty to cover with a veil our head but it talks about the necessity to be modesty, to return to the origins. The veil is a way to be modest and to safeguard from the development. So she took a piece of paper and drew for me two candies. One was wrapped in its coloured paper and another one without paper and bitten by a side. She asked me, if you had got a sweet wrapped in the paper and another one without its paper which would you eat? The candy with paper, it’s obvious, I told her.

So it’s the same with the women and the veil. If I wear the veil I can preserve myself. You wear the Hijab every day, but is it a choice for you? Sure. I like it. My husband or others in the family didn’t say me that I must cover my head. I want to wear it because I like it. What do you think about the Burqa and the women who choice to wear the total veil? They are very proud. It’s very difficult to put on a total veil for all life. I admire these women.