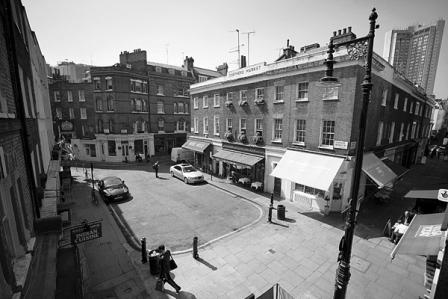 Tucked away between Piccadilly and Park Lane, an idiosyncratic, bohemian little enclave exists of fascinating alleyways and pedestrianised side streets which are full of an eclectic mix of upmarket boutiques, shops, bars and restaurants….Shepherd Market

There is the leather goods shop whose wares were the favourite of the late Princess Diana, Jackie Onassis and Princess Margaret. If you want to purchase a new bespoke case the same as one of theirs, you can make a private appointment to view the very bags they owned. If, on the other hand, you have some £500,000 to spare, you could order a set of beautiful alligator luggage as was done by a member of a far eastern royal family….and that doesn’t include the flawless diamonds that were added as decorations on the top….or perhaps you want a ‘jigsaw’ set of luggage designed to precisely fit the boot of your Aston.

If you are a golf fan, how about a specially designed, hand crafted putter, some think the world’s best. Naturally that can come with jewels encrusted in it as well…a mere £5,000 depending on your taste…but of course the more diamonds, the more expensive it can be. A recent Japanese customer ordered one covered in pink diamonds to match the cherry blossom on the trees on his golf course in springtime Japan….how to be colour co-ordinated for some £40,000. We trust his putting was improved as well.

John O’Sullivan, the current proprietor, loves being in Shepherd’s Market “We’ve had our store here for years and every day brings in a different client….aristocracy, film stars, Japanese tourists or just ordinary people wanting a very special case. There’s never a dull day and they all love coming to the Market…the shopping experience here is just as it would have been a hundred or even two hundred years ago…special, typically English…”

Next door, you can purchase a bespoke gun. This emporium made James Bond’s father’s hunting rifle used by Daniel Craig in Skyfall. Each gun is custom made for the purchaser…just the job for a bit of clay shooting at the weekend…on the assumption there are no spies or villains roaming the nearby fields.Then there is the florist who supplied the flowers for Prince Charles’ wedding to Camilla, or Zara’s wedding to Mike Tindall. His stunning, almost jaw droppingly beautiful decorative arrangements are renowned nationwide. For art lovers there is the gallery renowned for Banksy originals… Or perhaps jewellery is your thing? The Market has several jewellers…offering everything from delightful little silver charms to cutting edge diamond design combined with pioneering digital engineering. The jewellery of tomorrow…. hidden away in Mayfair today.

During the week this maze of enchanting little streets are the haunt of local residents and the discerning, suave professionals who work in and around the area….the hedge funders of Curzon Street, the estate agents and car dealers of Berkeley Square and Park Lane, and all the other myriad successful business people that inhabit the nearby streets. You’ll find them, at lunchtimes and after work, enjoying a cold beer outside one of the Victorian pubs, having a cocktail inside a fashionable bar, or a meal in one of the vast array of interesting little eateries dotted around the Market, or even perhaps going into or coming out one of the area’s upmarket casinos and clubs.

There is everything to eat and drink in Shepherd Market…from the charm of either rustic or upmarket fine French cooking, to a Polish/Mexican bistro via Italian, Turkish and Lebanese gastronomy. There’s something to suit every palate and budget.

Kitty Fisher was the celebrated 18th century courtesan who famously ate a hundred guinea note with a piece of bread and butter (that’s £25,000 in today’s money!) She lived in Carrington Street, just off the Market and there is a restaurant there dedicated to her…why not go there and try a ‘Bad Kitty’ cocktail and the 21st century version of a £100 note sandwich. The builders recently redecorating the restaurant swore they heard her laughing when they slept there overnight on the job one weekend…..

Shepherd Market is the hidden gem that was originally built by an eighteenth century property developer, Edward Shepherd, in the mid 1700’s, on the site of the original May Fair. This 15 day fair was established in the 1680’s by James II, grandfather of Bonnie Prince Charlie, mainly for cattle trading, but the Fair dwindled away as the area became home to new houses for the gentry together with a duck pond, theatre, market and the paved alleyways that are still with us today.

Over the centuries since, this little enclave has been the home to a variety of people….everyone from pop stars to the aristocracy with a mix of artists, writers, F1 drivers and politicians all mingling together. This is what gives it its charm. It’s still home to a large number of discreet residences, conveniently situated near to the buzz of Piccadilly and Park Lane, but far enough away to enjoy a strange calmness amidst the excitement that is the vibrant excitement of London today.

Scott Collier operates out of a photography shop in the Market “I’ve been here for some twenty five years and just love it. There’s a real sense of community between the residents and the shop owners…everyone chats to each other in the local pubs and it’s one of the few places in London where you can get a really different and interesting shopping experience…very relaxed with no hassle, then go and have a drink or a great meal. What more could you ask for in the very centre of London?”