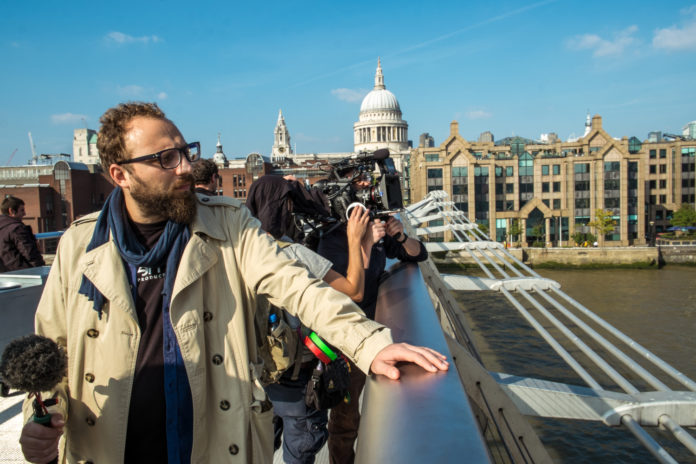 a long time, everyone talks about it, everyone reads about it. Italian immigration is an important

to get in UK than all the other countries. Why so many italians crave to come in London? There

are many answers: because of their dreams, their hopes, their urge to express themselves, their

expectations of a better future, because they are searching for richness, for a place that can listen to

them, because they are looking for all of the chances that Italy has never offered.

Although, if we analize it, we find out that the impact with London is not easy at all. Often,

the first months, if they are lucky, otherwise they have to work hardly in the kitchens. What kind of

immigrant is the second generation one? Young, often graduated, often resolute, even more without

any target. In conclusion, London seems to be a real goal for everyone who wants to start again, a

white page where you can write the new story of your life, maybe continuing it with other words,

To understand better this kind of immigration and the way behind, a young talented director

(immigrated, of course) has started to narrate the life of italians in London by filming them, through

messy hair, wide forehead and a long wise beard, just like the artists. Luca started to film the life

of italians in London, from the famous ones to the unknowns, in every sector, from journalism to

catering, with the purpose of revealing something that exists everyday in London, even if we can’t

see it: italian people. Luca Vullo leaves from Sicily, he gets interested in cinema at eighteen years

old and starts to think seriously about it at twenty, when he starts to film documentaries, short films

and commercial clips, getting so close to the camera that it quickly becomes his third inseparable

When someone meets Luca is somehow impressed that there aren’t only two eyes looking around,

but there is a third one stealing some part of us that we weren’t aware to own. He takes this part and

he shows it to us in a documentary called Influx, already recorded and now in the assembly step. It

will be ready for March, but everyone already knows it and reads about it, it’s already a big success

and Luca deserves it all, because he’s a genuine person, in front of his friends and also behind the

camera. Everyone loves him.

Maybe we feel it because we met his third eye at least once, maybe because we are immigrants and

we understand the hard steps we made to get in UK, or simply because it’s about all of us. Because

Influx is all of us. Influx is you that is reading and probably thinking of coming in London. Or

maybe you’re already in London. Influx is an act, a smile, a grimace, a sigh, a victory, a defeat.

Influx is through all of us.

Luca Vullo is not just a director, he invented something that thrilled academics, schools, theaters,

actors, institutes of italian culture and universities: the way of teaching body language to foreigners,

something typical italian (expecially of the southern ones). For example, the umbrella gesture, the

horns one, and so on.

Gestures that talk instead of words, with Luca getting silent, putting down the camera, reaching

the desk and becoming a dumb teacher who talks with his body. And this is so much liked that

he’s called from all over the world, Cambridge, Norway, USA, Germany, Denmark.. Gestures are

human: thinking of a caress, how many words should we use to describe that moment? Really a lot,

meanwhile a gesture can say way more. This is what Luca is trying to teach.

Successful immigrant, started from zero, Luca has attracted like Forrest Gump a lot of people

following him, because we are all running toward something.. Or maybe escaping from something.

The only thing that will immortalize us is Influx, the awaited documentary, and people will talk

about it. They will talk about us for a long time and it will be needed for the next generations, so

that they will understand who we used to be.