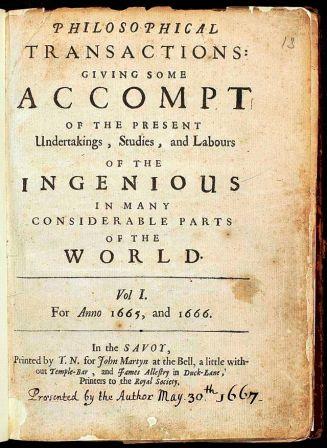 The Royal Society is the publisher of the Philosophical Transactions, the oldest surviving scientific journal in the world that it began life in 1665.

The journal was an initiative and personal property of the Royal society’s first secretary Henry Oldenburg. It consisted of editing aspects of his correspondence, reviews, experiments form natural philosophers based in the UK, and mainland Europe. The original title of the journal was Philosophical Transactions: giving some accompt of the present of the ingenious in many considerable parts of the world.
The early Philosophical Transactions consisted of reviews, summaries and observations of experiments. In 1887, Transactions was split into two series, ‘A’ and ‘B’, for the physical and biological sciences respectively. The science journal first went online in 1997 and in 2000; the entire back issue archive to 1943 has been freely available. Currently, 26 issues of both Philosophical Transaction and B are published annually.

Philosophical Transaction is the longest-running scientific periodical, in its pages appeared a significant number of the most important discoveries and developments accomplished by the major worldwide scientists like Robert Boyle, Isaac Newton and Charles Darwin.

This exhibition is open from December 2014 to June2015 at the Royal Society. Certainly, it is a rare opportunity to learn about the history of the journal. Also, see a wide range of invaluable papers like the copy of James Clerk Maxwell’s paper on ‘A dynamical theory of the electromagnetic field’ (Phil Trans 1865)
The exhibition is a part of a ‘Publishing the Philosophical Transactions: the social, cultural and economic history of a learned journal. 1665-2015’ project. This project includes many events and conference to celebrate this important anniversary.
As indicated in the exhibition brochure “The project runs from 2013 to 2017, and is led by Aileen Fyfe at the anniversary of St Andrews and funded by the arts and humanities research council.[..]By 2017, the team plans to write the definitive history of the commercial and editorial practices of the Philosophical Transactions”. (1)

In addition, the current issues of Philosophical transaction A and B celebrate this anniversary publishing a selection of landmark papers, guest-edited by leading authorities in physical, mathematical, engineering science and life-science.

The selected papers had a high scientific impact when published and remain influential today. For example, in Philosophical transactions A, there is the article “Newton shows the light: a commentary on Newton (1672) A letter…Containing his new theory about light and colours “by Pr P.Fara. (2)
Who visits this exhibition makes a time travel among 350 years of science journalism. The strictly relationship between science and the popularization of science is one of the most important aspects of this axibition. Learning about the greatest discoveries in science, by the history of a scientific journal. A way to understand how science and the popularization of science walked side by side for centuries and why this relationship is so important.