Jimmy will be a prominent character at the UK’s largest, free to attend, seafood festival. The 8th Pommery Dorset Seafood Festival – takes place on 11th to 12th July 2015 in Weymouth Harbour and is getting ready to #whelkcome over 50,000 visitors.

Whilst focusing on Dorset and the fishing industry along the South Coast, the Pommery Dorset Seafood Festival also looks further afield when discussing larger topics affecting fishing and seafood. Jimmy Buchan, fisherman and trawler-man, joins the festival from Scotland to share his love and knowledge of deep-sea fishing and specifically the langoustine.

Langoustine is the most valuable shellfish species to Scotland, and the second most valuable species overall to the Scottish industry. Total value of landings in 2013 were approximately £62 million

The UK takes over one third of langoustine landings worldwide

Despite these incredible statistics, many langoustines are in fact exported to France and Spain. Langoustines have long been underrated in the UK and seen as the poor cousin to lobster. But this is beginning to change with many chefs using Langoustines in their menus.

In Spain, langoustines are seen as part of the staple diet. During the 2008 financial crash, the Spanish, whom were severely affected, did not give up on their beloved langoustine and rightly so! Jimmy hopes to introduce the same feelings here in the UK, encouraging Brits to find the langoustine love!

Jimmy offers some advice on how to cook, peel and eat fresh langoustines! Jimmy has a ‘KIS’ policy – Keep it Simple!

Firstly ensure that your langoustines are FRESH! They should have their legs and antennae intact and their eyes should be almost jet-black.

If you have a whole Langoustine, simply steam for 3-4 minutes, you will know when the langoustine is cooked by looking at the meat under the tail. There is a light membrane covering it. This should have turned white and will have been pink before. Never over cook a langoustine!

To peel the langoustine, pull the tail away from the head and claws. Pinch the tail between your finger and thumb to break it and then pull it off.

You can then serve these cold, with a little salad and a nice lemony mayonnaise.

The next part might not be for everyone, but Jimmy loves to crack the claws, break off one end and suck out the delicious meat.”

Another great way to enjoy a langoustine is to split it into two half, baste with a little oil or butter and grill for 4 minutes at medium to high heat. The meat can then be picked out with a fork and enjoyed.

Langoustines are delicious, caught in the UK and underrated by many, Jimmy hopes to encourage more to try them out at home, proving they’re not a shellfish to be scoffed at!

Cut the langoustines in half (lengthwise), gently crush/crack the claws, and line them up on an oven safe tray with the shell side facing down.

Mix the rest of the ingredients and spread over the cut side of the langoustines.

Bake them in the upper part of the oven for 5 minutes.

Jimmy recently launched his new venture “Fish in a box”, fresh fish to your door within 24 hours! He is available for interview and will be attending the Pommery Dorset Seafood Festival on the 11th and 12th July where he shall be demoing not only langoustines, but other white fish species too! 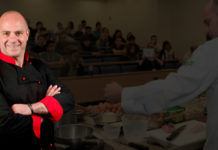 SPAGHETTI WITH CLAMS AND ASPARAGUS