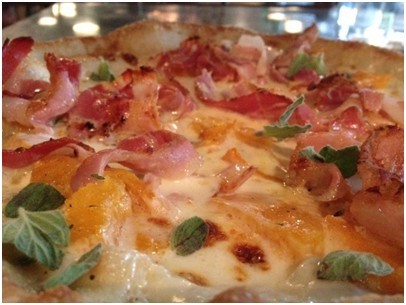 Londra-The made in Italy, chose Shoreditch, the hipster area of London, to taste the authentic Italian aperitif, on the 3rd and the 4th of September. Although there different Italian kitchens were present, as for example the Sicilian one, this event wanted to focus attention about Milan style.
Not only food but even music and shows warmed the cold atmosphere of London.: the evening show was entertained by Luca Vullo, a Sicilian film director and producer of his two docu-fiction: “The voice of body” and “Influx”.

Every guest was amused by Luca’s show which introduced Italian gestures.

This initiative is not bizarre, because it consists in comparing two different cultures, learning their values and defects. Luca summarized all with one sentence “English people drink to seem Italians; Italians drink to speak English better”.
Also the fair was an opportunity to sponsor the famous EXPO, since a big percentage of English people don’t know it. However the final goal of the fair was to improve the Italian exchange.

Discovering Modern and Pop Art at the Tate Modern