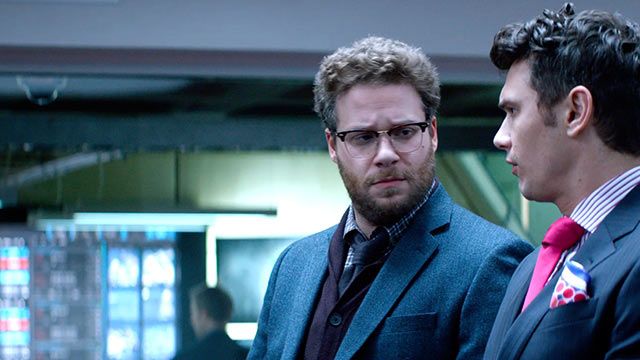 The Interview is a comedy with a political background in which a showman Dave Skylark (James Franco) and his producer Aaron Rapoport (Seth Rogen), decide to make something different in journalism for their variety and gossip programme.

They discovered that north-Korean leader Kim Jong-un was a huge fan of their show and they successful arranged an interview with him.

The next day, CIA Agent Lacey proposes that Dave and Aaron assassinate Kim.
This could look like a very funny movie but the plot isn’t so nice: the movie is a combination of gag in which Rogen is a smart, ambitious crazy and Franco is a honest silly, unaware.

The mix of the two anyway is nice and funny. Lots of the comics scens are linked to the incorrectness of the politic sentences said by Franco. They live as two adolescents, stupid and immature.

The other relevant character is Kim. During the first part he pretends to be completely different from who he really is: kind, funny and very willing to help other. But then the real Kim is revealed and is going to be dangerous for everyone around him, including Franco and Rogen.

This film was criticizes for its contents and also for the role of the main characters .The film was consider an attack for the North Korea because it tells the story behind the assassination of a leader and it would be consider as an act of war .

The North Korea government threaten to Usa an attack if Columbia Pictures released the film so the company was forced make changes and only when it was considered acceptable for North Korea it was released.
Few months later even the Sony Pictures Entertainment was attacked by the GOP (guardians of peace), a group of Korean hacker, who said that they could publish private thing about movie stars working for Sony such as George Clooney and Leonardo Di Caprio.

For thethreas of the GOP Franco and Rogen cancelled their public apparition for the film promotion. The film didn’t satisfied the expectation of the people but it had large collection
The north Korea criticizes the realising of the film with a picture in which Obama is like a monkey.

The caracther of Dave Skylark can’t be consider a journalist; he is just a showman using an informal language and in his interview doesn’t speak about politc, weather, report but only about music, gossip, sport, curiosity. A showman offers an entertainment service while a journalist tells the facts in an object way. Skylark in the film tries to do the journalist but he can’t do this because Kim interferes with his work