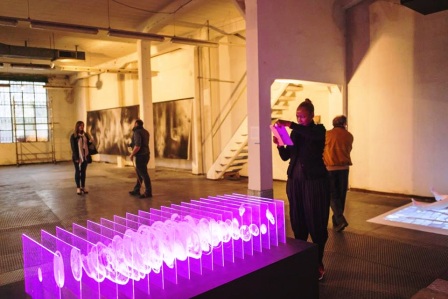 To ensure that they attracted the best possible talent they also decided to make the show free for artists to exhibit.

Now in its second year running, ARTROOMS is taking over 70 bedrooms at a top 4 star hotel in Marylebone, offering all of them exclusively to rising independent artists for 4 days during the London Arts Fair in January.
The decision to make the show exclusive to independent artists was a major gamble.

Last year’s event featured a mixture of gallery signed artists and independents, but after receiving strong encouragement from industry experts, and rave reviews from visitors, the organisers decided to make the event exclusive to independent artists with the hope that galleries would be happy to sponsor this as a hunting ground rather than a showcase.

ARTROOMS is offering select sponsors a unique opportunity to be able to entertain their clients in a private suite during the event (included in the show’s sponsorship fee) and also a special matchmaking service by prearranging meetings with artists and buyers that fit their requirements.

“There is no other event offering independent artists this level of exposure in the UK” says the show’s founder, Cristina Cellini Antonini. “After last year’s show we realised not only how much incredible talent exists in the UK, but also how difficult it is for independents to gain recognition. This show is a unique opportunity to find “the next Picasso” in the comfort of a luxurious four star hotel in Regent’s Park.”

Cristina is herself a respected arts industry veteran who has organised arts festivals in Italy and worked across several continents. She first saw the ‘art rooms’ concept in South East Asia and was inspired to bring it to Europe. She felt that London would be the perfect place to launch it due to its standing in the arts industry.
Her gamble seems to be paying off with a number of avant-garde galleries like Contini Art UKjoining their roster of sponsors.

“I have decided to share this vision and invest in the ARTROOMS project to support independent artists. As a private collector I am always looking for emerging artists and this fair is the perfect “hunting ground” to uncover tomorrow’s talents. At the first edition’s private view we had over 700 guests and I trust ARTROOMS 2016 will attract even more international private collectors” says the show’s co-founder and co-director Francesco Fanelli.
ARTROOMS is also drawing some big names as part of their ‘guest artist’ line-up, including Peter Crnokrak, a genetic scientist who turned his knowledge into art using scientific equations to create mesmerising digital creations. His work has caught the eye of customers as noteworthy as Apple.

Last year’s show managed to draw over 3000 visitors, including 700 VIPs, at the private view and 100 guests at the fundraising Gala Dinner & Auction for the Charity partner Bow Arts Trust.

One of the key factors to the show’s success has been the environment. “Hosting an exhibition in a bedroom creates a very intimate space between the artist and the guest,” continues Cristina, “often we find the artist sitting next to their guests on the bed talking at great lengths about their inspirations. It forms a special connection between the buyer and the work.”

“Although extremely beneficial, galleries have become a barrier to many artists that haven’t got into the market circuit yet,” says Lorenzo Belenguer, artist and art critic (FAD Magazine and the Huffington Post). “Cellini is very generous in seeking sponsorship to fund the ArtRooms Fair, so talent, and not wealth, will be the only reason to being selected for this unique project.”

Lorenzo believes that the ARTOOMS is having a wider impact on the industry, paving the way for other innovative events during the week such as ‘Condo’ which features 22 galleries across 7 London spaces.

“Cellini is a true pioneer. Thanks to her determination, London Art Fair Week has positioned itself as the most important week in the London annual Arts calendar for the mid-market.”

Among sponsors of the 2016 edition are Marine Tanguy Art, Konnii, the Italian Chamber of Industry and Commerce in the UK, the Italian Trade, Brownhill Insurance, Jackson Art, Celeste Prize, Useum, Belluzzo & Partners, the Wall Street International, and Rhubbit.

With ARTROOMS already showing so much promise, the organisers have plans to take this pioneering movement abroad, expanding to Dubai in 2017 and other cities after. Their aim is to showcase the talent they are finding here to other markets.

“There is a heavy demand for European artists in the Middle and Far East, but they struggle to capture it due to the costs of shipping and travel. We want to take the best artists there for free,” says Cristina.

Mirroring last year’s format, ARTROOMS will open with a special, invitation-only, preview on the 22nd of January and then to the general public on the 23rd where it will remain open till the 25th.

The fast approaching deadline for applications is the 15th of December 2015. Artists wishing to apply can do so right now in three simple steps on the show’s website: http://www.art-rooms.org