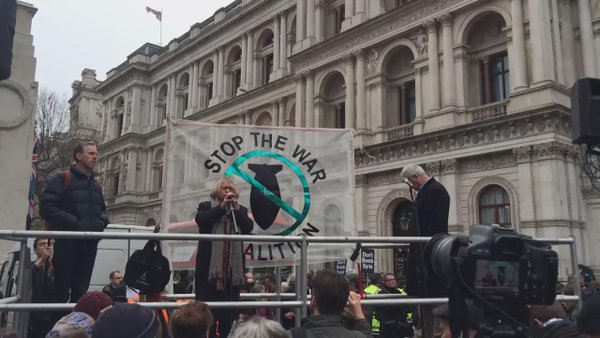 After the speech held by British ‘s prime minister David Cameron at the house of parliament, the Londoners belonging to the Labour and Socialist Workers parties, during the morning of today, Saturday 28 November, have organised a great demonstration of protest against the intention of Conservative party to carry out several aircraft strikes on the ground of Syria.

After the terrible terrorist attack happened at Bataclan arena in Paris, the level of alert in whole Europe, and mostly in those countries like Belgium and England where there is a multi-ethnic society, is very high.

Cameron during his speech with the president of French Republic Hollande, vowed logistic and military support to the French aviation for carrying out raids against the strongholds of Islamic State that are located between the borders of Syria and Iraq.

But two days ago, in his recent speech in front of the members of the parliament, he did not hide the will to attack with the own Royal Air Force the bases of this State of Terror.

However this Cameron’s porpoise did not like to the people joined this morning in Downing Street, in fact they don’t want that United kingdom is involved in another war against the states and the peoples of Middle East.

They affirm that the critical international situation in that area is the result of a wrong foreign policy of states such as: United State, Saudi Arabia, Turkish and England; they continued saying that to bomb Syria and Iraq will not improve the things but will be only worse.

In the interviews that I took during the demonstration the protesters said that the reason of this political crisis in Syria and Iraq is the sequel of years of erred military actions.

For the crowd of protesters, the United Kingdom has been bombing for decade others countries as a reminiscent of its Colony Empire, and this aircraft strikes caused the delicate situation that the people of Middle East are living in this moment.