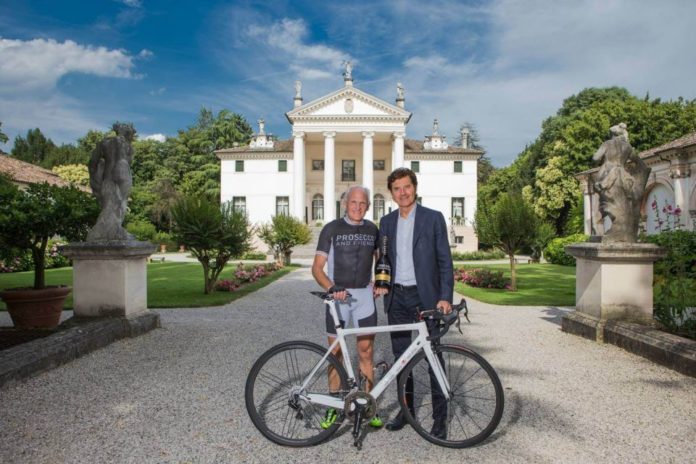 LONDON – On this very last day of the Bellavita Expo, the most important food & wine fair of Italian products in London, something rather special and unique happened: in the morning, at about 11am, a bottle of Villa Sandi Valdobbiadene Prosecco Superiore DOCG – departed from Valdobbiane Italy on July 9th – arrived at Bellavita, attached to the bike of one of the two cyclists whose contribution and participation was vital to the success of the project.

Mike Ramseyer and his good friend Nick Wheeler cycled for 1500km across Europe to get to London on July 19th and to give us, and the visitors who were at the fair, an incredible show: with Villa Sandi being one of the main sponsors of Bellavita, choosing the arrival point of the bottle was easy. The bottle was presented by the cyclists together with Mr. Giancarlo Moretti Polegato, owner of the Villa and the firm, on the Wine Academy stage to a chef from a London restaurant, “Da Cavendish”, a meeting which symbolises the perfect match of food and Prosecco.

The two cyclists set off from the incredible Villa Sandi Headquarters, with the bottle of Villa Sandi Prosecco strapped on tightly to their bikes and begun their journey to Britain, after two days in the Villa, where they also had the chance to visit the firm and see the production themselves, thing which is available for everyone who is interested in seeing the “birth place” of this sparkling wine and tasting it as well. Mike and Nick started their journey, which gave them the incredible opportunity of admiring some of the most stunning places of Switzerland and France as well as some quite hard time due to bad weather; despite the heavy rain, the idea of a glass of Prosecco waiting for them at the finish line at Bellavita kept them going until the very last day, when they finally crossed the UK border and safely delivered the “1500km bottle” to Douglas Santi, the Italian chef in charge of turning this already unique product in something even more peculiar.

The connection between the Villa Sandi Prosecco and bikes is no new: for seven years now Villa Sandi is the main sponsor of the “Prosecco Cycling” project, an event which attracts thousands of people every year – 2,400 just in the 2015 edition, 400 of them being foreigners – mainly Britons. Last year’s edition was the one which Mike took part in, when he cycled from the UK to Italy and then participated in the competition: we can say that #ProseccoToLondon was a way for him to “close the cycle”, since he came back home in the same way of how he left almost a year ago. This year’s edition will take place in Valdobbiadene, Treviso, on October 2nd and is expected to be a great success just like its past editions and Mr. Giancarlo Moretti Polegato will also take part in the competition, being a bicycle lover himself.

The idea for this project, #ProseccoToLondon, was born from the positive firsthand experience of Mr. Moretti Polegato, who told us during our interview, that he had the chance to discover some hidden yet amazing places among the hills where the competition takes place. With cycling being one of the most loved sports here in the UK as well, the genius link between the two was just at hand: in addition to that, the UK is currently the first marketplace in the world for Prosecco, which is loved and appreciated more and more by Britons – especially by women. This spumante’s peculiarity is its ability to adapt to any kind of food and/or dish, in the words of Mr. Moretti Polegato: it is widely used in Eastern cuisines as well as in European ones, it can be drunk as a cocktail, with meat or fish – including sushi and with fruit as well.

Villa Sandi can be considered one of, if not the absolute protagonist of the fair: it was the sponsor of the Best UK Sommelier competition which took place on the very first day of the expo and which was won by a young Italian sommelier, currently working at “Locanda Lucarelli” – Mr. Moretti Polegato stressed the importance of letting young people in the industry, because he strongly believes that the next step – after reaching the level of quality which charachterises Italian wines – is to promote the several brands and types of wines, thing that can be done at its best by youngsters.

The suggestion and the piece of advice we would give you after meeting, tasting and enjoying the Prosecco from Villa Sandi is to try it and enjoy as well, to visit the places where it is born and where it is produced. Places that are also extremely appropriate for a holiday surrounded by nature, relax and… good wine.