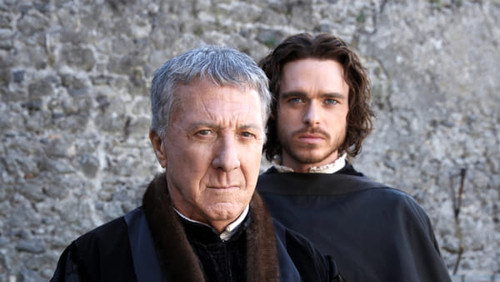 Sitting in an endless and luxuriant vineyard, Oscar-winning actor Dustin Hoffman looks more Italian than he actually is. “What a beauty,” he murmurs while enjoying the breath-taking view of Florence and a bunch of Tuscan red grapes.

In the new historical drama I Medici: Masters of Florence, Hoffman plays Giovanni de’Medici, the forefather of the House of Medici. This was one of Europe’s most powerful banking families and political dynasties, who governed the Republic of Florence during the 15th century.

I Medici has no rivals in its genre. Unlike Neil Jordan’s The Borgias and Michael Hirst’s The Tudors, this series is much more accurate in terms of historical details. Settings and costumes accurately reproduce the period in which the story takes place.

Created by Frank Spotnitz and Nicholas Meyer, and directed by Sergio Mimica-Gezzan, the drama makes the viewer curious. The first episode, Original Sin, opens with the death of Giovanni de’Medici, killed by a hooded character who had poisoned the red grapes of his vineyard.

“Who’s the murderer?” wonder the sons Cosimo de’Medici (Richard Madden), and Lorenzo de’Medici (Stuart Martin). This question is the driving force behind the series, as it extends to the audience and drags them into the quest for their father’s assassin. Giovanni’s death also turns out to be the perfect excuse to carry the public into a cultural journey.

Simple and austere, I Medici’s setting moves from darkness to light, from the late Middle-Ages to the dawn of Renaissance, flashing back and forward in time. The Medici House is therefore depicted in two different periods, 1430 and 1450, and the drama successfully portrays the brothers Cosimo and Lorenzo when they were 20 and 40 years old. The costume and makeup design in the series captures the differences between the two periods in an outstanding way. Every single detail concerning the actors is given visible importance, and faithfully adjusts to the chosen period.

The Italian artistic masterpieces crown the drama. The cities of Firenze, Montepulciano, Bracciano, Pienza and Viterbo host the story of a family with its problems, passions and strengths. The international cast ranges from well-known actors to rising stars, and it includes the impressive performances of Annabel Scholey, Guido Caprino, Brian Cox and Valentina Bellé.

A highly accomplished and captivating series, filmed in English and produced by RAI, I Medici glues its public to the screen, dragging it into an intriguing mix of history and mystery.

The original English-language series is now available on Netflix. The Italian-language version of the drama can be found on RAI Play.