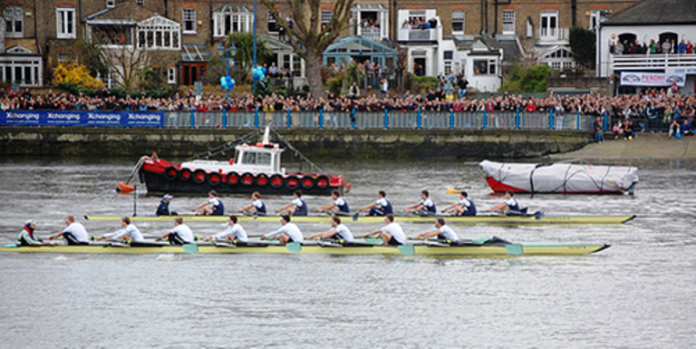 When the most recent race was the 2016 race which took place on Sunday 27 March 2016, the history of the race retrace back to 1829. The event has been held annually since 1856, except during the First and Second World Wars. The path covers a 4.2-mile (6.8 km) stretch of the Thames in West London, from Putney to Mortlake. Members of both teams are traditionally known as blues and each boat as a “Blue Boat”, with Cambridge in light blue and Oxford dark blue.

The race will begin at noon at it will go on until the finish line, which might be reached soon. Indeed Cambridge holds the course record of 16 minutes 19 seconds set in 1998, and 82 victories ( men ) and 41 ( women ) behind them, where Oxford boasts 79, with one dead heat. The teams  will compete for the prize on Sunday 2nd April, starting from Putney Bridge. Public can watch the race for free by the river side.

Ladies will go first at 4.35 p.m. while men will follow at 5.35. Spectators will find good spots in Putney Brigde, starting point, Thames Reach, Hammersmith Bridge and Dukes Meadow. As the importance of the events touches the crowds, The sponsors of the Oxford-Cambridge boat races have announced they are donating their title sponsorship of the 2016 and 2017 editions to the event’s charity partner. Indeed The event will now be known as The Cancer Research UK Boat Races for the next two years, BNY Mellon and Newton Investment Management announced on Tuesday.

As traditional event, 300,000 people are expected to be present on the riverside this year, so we recommend to get there early in order to find a good spot.