He was an idol and was disqualified. He returned and became the Pablito of the Spanish Mundial in 1982. This is, in short, the story of Paolo Rossi who, from 1980 to 1982, from the punishment for football betting to the victory over Germany, lived the two hardest and most exciting years of his life. A fairy tale with a happy ending, imbued with striking successes alternating with lacerating pains, with strong surges and ruinous falls, with dreams come true and deep wounds, with precious awards and injustice. It is the black and white of an exceptional existence, the perfect script of a film that has enchanted generations and continues to be reviewed and relived by the public.

Written in collaboration with the journalist Federica Cappelletti, the book Quanto dura un attimo (How long it lasts a moment) is the autobiography of a boy who has defied fate to become a legend, realising his dream as a child and writing immortal pages of the history of universal football. Of this, and many other things, we speak directly with the protagonist of this extraordinary life: Pablito! 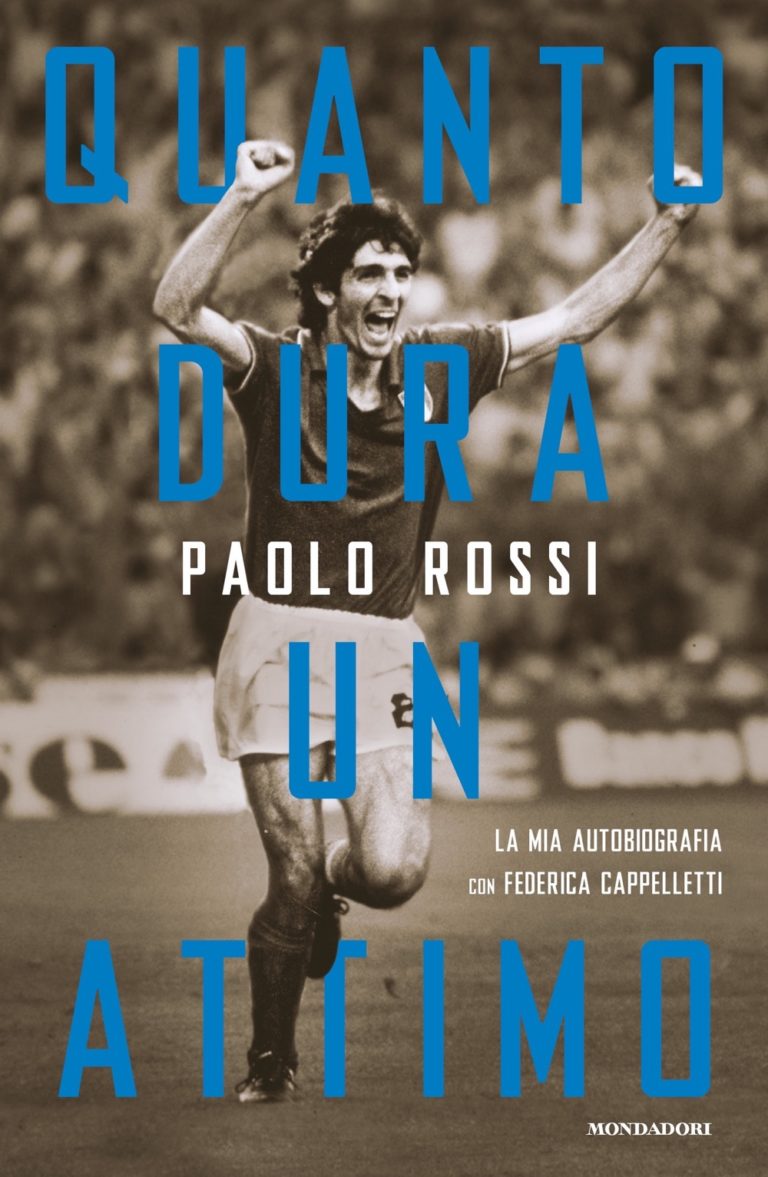 “How long it lasts a moment”: a book written in collaboration with your wife, Federica Cappelletti. How was the idea born?

The idea was born over a coffee. It was a grey morning, it was raining, and the sound of the falling rain reminded me of the cleats that beat on the floor in the tunnel that separated the changing rooms from the Bernabeu Stadium in Madrid. It was the 1982 Spain final: Italy-Germany. I still have chills on my skin. My wife asked me to go ahead with the story and then tell it to the world, in a book, so that it could become everyone’s heritage.

What inspired the title?

The moment has always been my characteristic. For me, it meant anticipating the opponent. Get there first. Score. But the moment is also the happiness I felt in those eternal moments of the World Cup in Spain.

Have you always wanted to be a footballer or did you have other dreams as a child?

My dream was to become a footballer. I had an idol. His name is Kurt Hamrin. He had my characteristics; he was an opportunist on the field. I liked him. But I also thought about being a doctor. Rather, my mom wanted me to be an accountant.

Before turning into legend, your career had undergone several jolts, causing strong reactions from the press of the time to the news of your call to the World Cup in Spain. How did you experience that period before arriving in Iberian land?

I suffered a great injustice in my life. I was disqualified (despite being innocent) for two years for not reporting a teammate and two fixers who wanted to combine a game. The Perugia-Avellino in which I scored two goals: but only because it was what I knew how to do. They paid me to score goals. I scored many. So the call to the World Cup in Spain was meditated by Enzo Bearzot and in the end apt. I repaid the coach for his boundless trust and I’m proud of it.

And what, on the other hand, is the most beautiful memory you have of that extraordinary adventure that was the 1982 world championship?

The team. The coach. The sense of family. Home. The affection I felt by everyone. And then, the three goals in the match against Brazil. I became a legend thanks to them, but they also gave me the strength to start again. And I became the top scorer, world champion, golden shoe and golden ball.

Among others the book is dedicated to Enzo Bearzot. How important was his figure to you?

I owe a lot to Enzo Bearzot, I owe him my rebirth. He knew what I was made of and challenged everyone by proving he was right. He is in my heart, where he will remain forever.

The victory in Spain helped to bring colour back to an Italy that tried at all costs to leave the darkness of the Seventies behind. How did the Italians welcome you on their return?

The return to Italy was a tricolour feast. Italy, with that World Cup, has found confidence, raised its head, the Italians have returned to smiling. Sociologically it was an important victory: one of the most important in history.

Among the legendary companions with whom you had the privilege of playing, was there one to whom you were most attached?

I have been and I am deeply attached to everyone. But Antonio Cabrini and Marco Tardelli remain the closest. Also today.

And the most feared opponent?

Brazil, without a doubt. But only before the final, at least for me!

The first I scored to Brazil definitely unlocked me. But the others weren’t bad either!

Among the prestigious prizes and awards obtained, which made you happier?

What did you do once you “hung up your boots”?

I am a commentator, I have a resort in Tuscany (in Poggio Cenina), I was a builder, I produce oil and wine. I write books with my journalist wife (laughs).

Do you like today’s football? How much has changed in forty years?

I like today’s football: it’s faster. The changes have been many, profound, starting with the management of cards and players. But rightly so, football is also adapting to modernity.

Do you see yourself in any football player today?

There aren’t many players with my characteristics. Perhaps one who resembles me a bit is Mertens of Napoli.

Do you have any regrets?

None. I did what I wanted to do, I made a dream come true, I won everything there was to win.