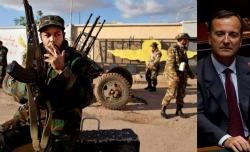 According to the Minister, as NATO pressure intensifies “there are signs of rift”, of “a crack in the wall”, which is what we “were hoping for”, that is, that “the situation inside the regime would implode”. “We have seen a lot of flags of the new Libya east of Tripoli”, he added, “and the other day one of Gaddafi’s nephews, the son of a brother or a sister of his tribe, launched an appeal from Doha urging the opposition to go forward, and asking that the Gaddafi’s no longer be supported”.

Moreover, “there are possible interlocutors in Tripoli, even within the Gaddafi government, who could be considered by the Benghazi NTC for a national unity government”. With the International Criminal Court’s incrimination, expected in late May, Gaddafii “would lose bargaining power”, Frattini pointed out, explaining how once the Hague prosecutor had filed charges “the obligation to arrest the Libyan leader would fall to all States, even nearby ones”.

According to Frattini, the dossier being prepared by the Criminal Court should also include the regime’s use of migrants as “a criminal instrument” for exerting pressure. As for the fate of the Libyan leader, Frattini underscored that “it is likely that international pressure has caused Gaddafi to take shelter in a safer place”, outside of Tripoli, “but not outside of the country”. The minister specified, however, that killing Gaddafi “is not possible” because “the mandate of UN resolution 1973 does not envision that”.