The O2, the world’s most popular music and entertainment venue, today announced that The X-Factor Live Tour have added a second date at the iconic venue, Sunday 1 April, when the production tours the UK throughout the spring of 2012…

Performing on the tour are: Misha B with her amazing outfits, voice of an angel Janet Devlin, the all round entertainer Marcus Collins, the one and only Johnny Robinson, the spine tingling ballads of Craig Colton, the most successful girl group in X Factor history Little Mix, the heart throbs that are The Risk, the vocal power house that is Kitty Brucknell, and come back girl Amelia Lily.

The tour kicks off in February 2012 and will hit 13 cities around the UK and Ireland. The X Factor Live Tour has been the biggest selling arena tour in the UK for the last three years.

Tickets for Saturday 31 March 2012 are already on sale. Tickets for Sunday 1 April will go on sale Saturday 26 November at 9am.

The Nutcracker introduced by Joe McElderry

Ballet will be returning to the world’s most successful music and entertainment venue this December as it stages the celebrated family Christmas show The Nutcracker. Birmingham Royal Ballet will follow the critical and commercial success of the Royal Ballet’s Romeo and Juliet which was staged at The O2 in June and was watched by nearly 50,000 people.From 27 to 30 December 2011 Victor Hochhauser and The O2 in association with Universal Music Arts and Entertainment will present six magical performances of Sir Peter Wright’s world acclaimed interpretation of the Christmas classic. Tickets on sale now.

Duran Duran have re-scheduled the show that was due to take place at The O2 arena on Saturday 28 May to Monday 12 December 2011.

Now booked to coincide with the pre-Christmas festivities in the UK, The O2 date and a further ten rescheduled dates (all of which will remain in their original venues) will mark the band’s first full UK arena tour in seven years, for which they are planning a totally new and spectacular production.

The O2, the most popular music and entertainment venue in the world, today announced it will be hosting the final of the ‘Premier League Darts.’

The O2, the most popular music and entertainment venue in the world, today announced it will be hosting the final of the ‘Premier League Darts.’

The field of eight players will be confirmed in January following the Ladbrokes World Darts Championship, with the top four players from the PDC Order of Merit joined by four Wildcards.

The likes of Wes Newton – who reached the Speedy Hire UK Open final in June – World Championship semi-finalist Mark Webster and Paul Nicholson, the 2010 Players Championship Finals winner, are amongst a host of top PDC players chasing a place in the tournament next year. 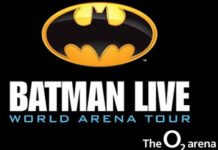 The Nutcracker comes to The O2

Britney Spears confirmed a second date at The O2 arena, on 28 October 2011.