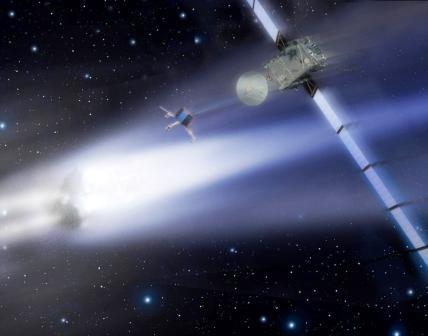 At the Royal Societ’s Summer Scienze Exhibition in London, there is a great important show about Rosetta.

The Esa Rosetta mission is the first mission in history to rendezvous with a comet, escort it as it orbits the Sun, and deploy a lander. During its 10 year journey towards comet 67P/Churyumov-Gerasimenko, the spacecraft has passed by two asteroids: 2867 Steins (in 2008) and 21 Lutetia (in 2010).
In Order for the Rosetta craft to reach the comet it was launched from earth over 10 years ago. its flight path through the solar sistem was carefully modelled and planned before launch. he spacecraft entered deep-space hibernation mode in June 2011, and ‘woke up’ on 20 January 2014. Rosetta will arrive at the comet in August 2014, and deploy the Philae lander in November 2014.ESA’s Rosetta spacecraft has found that comet 67P/Churyumov–Gerasimenko is releasing the equivalent of two small glasses of water into space every second, even at a cold 583 million kilometres from the Sun.
To escape from gravity af an obiect ,such as a planet or a moon, you need think must reach a certain speed to avercome the gravity pulling you back. This speed is know as the escape velocity.This velocity for an object depend upon its mass and its size. If we assume the object is spherical the escape velocity (Ve)is give by the equation:

where G is the Gravitational constant, r is the radius of the object in metres and M is the mass in kilogram.

A rendezvous with a comet and land on, to study to understand where we come from, it like a fantasy or ,to read a Litle Prince’s page, but it not, it reality.
‘In November, Rosetta will land’ on the comet 67P/Churyumov -Gerasimenko and we have a prove and new exciting facts about our lives and our universe.