LONDON, UK– The Tower of London has today been named as the best rated landmark in the UK and eleventh in Europe in the Travellers’ Choice TM awards for Landmarks, announced by TripAdvisor, the world’s largest travel site*.

The famous London attraction, which has been named as a UNESCO World Heritage Site and houses the Crown Jewels, was also named among the winning landmarks in Europe, along with Edinburgh Castle, which was named second in the UK rankings.

Gordon Innes, CEO London & Partners, the Mayor’s official promotional company for London said, “Last year was another record-breaking year for international tourism to London, with 17.4 million overseas visits. The Tower of London‘s spectacular poppy installation – Blood Swept Lands and Seas of Red – captivated the world and was one of the key cultural attractions drawing visitors to the capital, with more than five million attending the stunning display.

“It’s no surprise that this world-famous landmark, along with six other iconic London attractions, have been deservedly championed by the TripAdvisor community.”

“The Travellers’ Choice Landmarks, now in its third year, highlight some of the world’s most iconic, must-see attractions that have won over the TripAdvisor community. The UK is blessed with a lot of fantastic landmarks, but especially in the summer they can prove very popular, so it often pays to plan ahead and book a tour in advance,” commented TripAdvisor spokesperson, James Kay.

When looking at which nation’s travellers rate UK attractions the highest in their reviews, Russia came out on top, giving the winning UK attractions an average rating of 4.8 out of five[i]. While US and Brazilian travellers were found to be the most frequent reviewers of UK attractions after Brits.

Travellers’ Choice Landmarks awards honour top landmarks worldwide based on the millions of valuable reviews and opinions from TripAdvisor travellers. Award winners were determined using an algorithm that took into account the quantity and quality of reviews for landmarks worldwide, gathered over a 12-month.

Top three winners in the UK, Europe and the world with recommended value hotels and most popular tours:

For travellers planning a trip to one of the top three Travellers’ Choice award winning landmarks in the UK, Europe and world, TripAdvisor has identified top-rated Viator tours of these impressive sights, as well as highly-rated value hotels[ii] nearby with availability to book on TripAdvisor this summer. 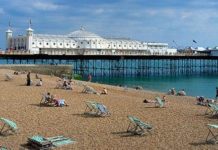