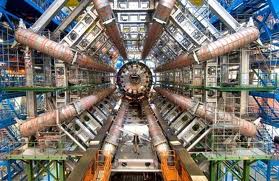 Geneva 14 February 2013. At 7.24am, the shift crew in the CERN1 Control Centre extracted the beams from the Large Hadron Collider, bringing the machine’s first three-year running period to a successful conclusion. The LHC’s first run has seen major advances in physics, including the discovery of a new particle that looks increasingly like the long–sought Higgs boson, announced on 4 July 2012. And during the last weeks of the run, the remarkable figure of 100 petabytes of data stored in the CERN mass-storage systems was surpassed.

This data volume is roughly equivalent to 700 years of full HD-quality movies.

“We have every reason to be very satisfied with the LHC’s first three years,” said CERN Director-General Rolf Heuer. “The machine, the experiments, the computing facilities and all infrastructures behaved brilliantly, and we have a major scientific discovery in our pocket.”

The LHC now begins its first long shutdown, LS1. Over the coming months major consolidation and maintenance work will be carried out across the whole of CERN’s accelerator chain. The LHC will be readied for higher energy running, and the experiments will undergo essential maintenance. LHC running is scheduled to resume in 2015, with the rest of the CERN complex starting up again in the second half of 2014.

“There is a great deal of consolidation work to do on CERN’s whole accelerator complex, as well as the LHC itself,” said CERN’s Director for Accelerators and Technology, Steve Myers. “We’ll essentially be rebuilding the interconnections between LHC magnets, so when we resume running in 2015, we will be able to operate the machine at its design energy of 7TeV per beam”.

The LHC exceeded all expectations in its first three-year run, delivering significantly more data to the experiments than initially foreseen. Physicists measure data quantity in units known as inverse femtobarns, and by the time the last high energy proton-proton data were recorded in December, the ATLAS and CMS experiments had each recorded around 30 inverse femtobarns, of which over 23 were recorded in 2012.

To put this into context, the particle whose discovery was announced on 4 July 2012 was found by analysing around 12 inverse femtobarns. That means CERN’s experimental physics community still has plenty of data to analyse during LS1.

“There will be plenty of physics to do during LS1, and not only at the LHC,” said CERN Research Director Sergio Bertolucci. “The LHC is the flagship of CERN’s experimental programme, but is nevertheless just one component of a very varied research infrastructure. All of the other experiments here have on-going analyses, so I’m looking forward to many interesting results emerging as LS1 progresses.”

For the first weeks of 2013, the LHC has been colliding protons with lead ions as part of the programme to understand matter as it would have been just after the Big Bang. The last four days of the run saw a return to proton-proton collisions, this time at reduced energy. These collisions will provide useful data for interpreting the data recorded with lead ions. Single beam studies will continue until the weekend, when the process of bringing the LHC up to room temperature will begin, allowing LS1 work to get under way.