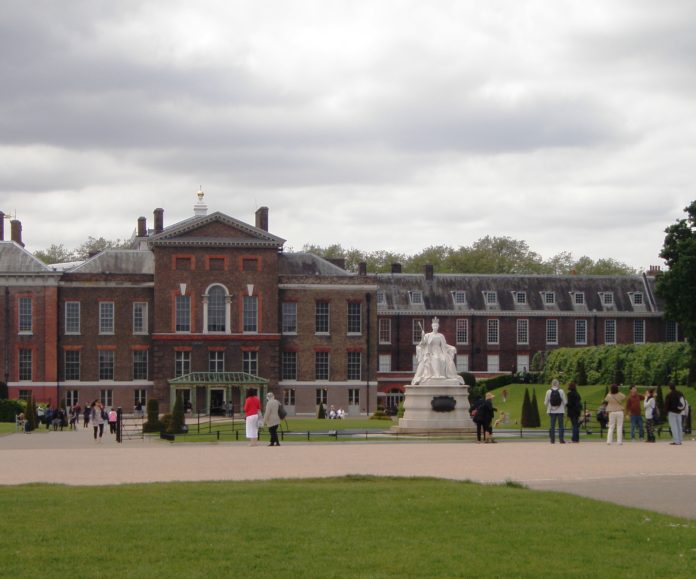 In one of the most beautiful zone of London, at the extreme part of Kensington’s Park there is one of the British Monarchy ‘s historic palace : Kensington Palace.
Monarchies from William III to Queen Victoria , who was born here, but also Princess Diana have passed their life in this palace. Within a few hours of the new that Princess Diana had Died on 31 August 1997, Kensington Palace was swamped with visitor.

The golden gate at the south side were covered with many floral tribute to the Princess.
If you come to visit the palace you can discover the secrets of the intimate life of the Queens and Kings. Built as a royal home for newly-weds William III and Mary II at the end of the 17th century, Kensington has been a stage for the drama of the nation’s history, with private scenes of love, loss, heartbreak. Now comes a new chapter in the story, Major change are happening here. A huge new garden reconnects the landscape and the palace. There are 4 tours all beautiful the first is on the king’s state apartments .

Climb the magnificent King’s Staircase where Georgian courtiers peer down from William Kent’s Spectacular design. The second tour is on the queen’s state apartments, where Mary II lived . This was a private family with personal secrets, reflected in the architecture of the intimate wooden paneled rooms in which they lived. The Third tour is on
Queen Victoria’s life, start with a beautiful red saloon where the Queen held her privy Council, a meeting of cabinet ministers and close advisors, in this room on 20 June 1837 just a few hours after learning that she was the monarch. But in this part of the Kensington Palace you can discover the private Queen’s life with all her objects, clothes and toys when she was a baby , but between the rooms you can feel the love for your husband Princes Albert, a true and sincere love story until death.
Prince Albert was a cousin’s Queen : “ My heart is quite going “ she wrote Victoria where her cousin Albert , Prince of Save-Coburg and Gotha arrived at Windsor in 1839.He was “ Excessively handsome with beautiful blue eye, an exquisite nose and such a pretty mouth with delicate moustaches”. She proposes to him four days later and he accepted. A romantic love story in a important historical period of England. The last tour is dedicate at the modern royals , are celebrate the style of some of Kensington’s most famous modern residents, including Princess Diana and Princess Margaret and William and Kate.
It’s unique cross the room and being enveloped by the real life, you go back in time , and sudden open a door and find yourself close to the apartments of William and Kate. Kensington palace is a palace that compared to the other Royal’s houses you can feel the real life and daily living.

“ it is not without feeling’s of regret that I shall bid adieu for ever to this my birth-palace. I have seen my dear sister married here, I have seen many of my dear relation here, I have had pleasant balls and delicious concerts here . I have held my first Council here too! I have gone through painful and disagreeable scenes here, this true, but still I am fond of the poor old Palace.” Queens Victoria says a fond farewell to Kensington palace 1837. Following here accession, the queen moved to Buckingham palace.