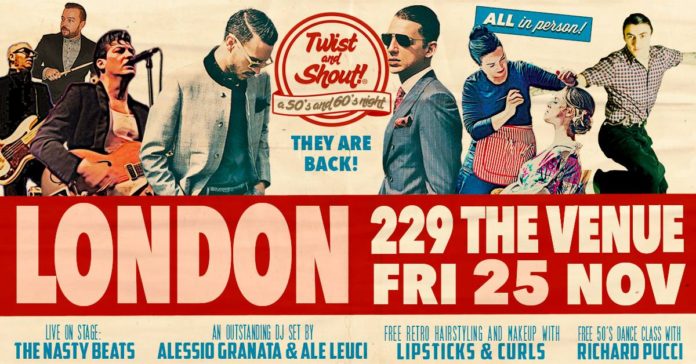 Facebook Event
Friday, November 25 at 9:30 PM – 4 AM
Nov 25 at 9:30 PM to Nov 26 at 4 AM
229 The Venue
229 Great Portland Street, W1W 5PN London, United Kingdom
Tickets Available
www.seetickets.com
FRIDAY NOVEMBER 25th 2016
LONDON • 229 THE VENUE
229 Great Portland St, W1W 5PN
From 9.30pm till 3am
In association with TIJ Events
ADMISSION:
☞ ADVANCE SALES: 8£ + adv
www.seetickets.com/event/twist-shout/229-the-venue/1024489
☞ DOOR SALES: 12£
★ A 50s AND 60’s NIGHT WITH LIVE BAND, DJS, DANCERS AND A VINTAGE STYLIST
★ THE ESSENCE OF THE FEVERISH 50s and 60s
★ THE MOST OUTSTANDING PARTY NIGHT IN THE DANCE HALLS AND FESTIVALS
THIS IS
★★★ TWIST AND SHOUT! A 50’S AND 60’S NIGHT ★★★
Ladies and Gentlemen, Mesdames et Messieurs, Signore e Signori: please welcome Twist and Shout back to London! Following the success of its UK debut, the night that shakes up the way tens of thousands of people across Europe are dancing and brings back the vibe of the two decades that changed the world, has announced a new show: November 25th 2016.
Don’t wait any longer: dress up, shine your dancing shoes, grab your partner and join us for the most explosive event to hit London.
It’s a promise: after a night with us, you will never dance the same way again.
Starring:
★ Spinning the records: Monsieur ALESSIO GRANATA and Monsieur ALE LEUCI are ready to entertain you throughout the night with their curated selection of rock ‘n’ roll – fifties, sixties, swing, rhythm and blues, garage, beat, doo wop, American, English and Italian Graffiti, boogie-woogie, and twist – the soundtracks of the most exciting decades of all time. These same records have been driving the Italians nuts recently, causing them to shake their hips.
★ FREE HAIRSTYLING AND MAKE UP by LIPSTICK & CURLS (LONDON):
Lipstick & Curls have been awarded the best hair and makeup company by the London Vintage awards (2012, 2013 & 2014).
Lipstick & Curls are the UK ‘s premier hair & make up team, offering a unique service throughout the entire UK. They provide specialist services for weddings, parties, corporate events, workshops, hen nights, photo shootings and private appointments.
Website: www.lipstickandcurls.net
★ Live on stage: THE NASTY BEATS (ITA):
★ FROM 9.30pm : FREE 50’S DANCE CLASS WITH RICHARD PUCCI
Richard has been performing and teaching for nearly ten years, specialising in the vintage dances from the 1920s to the 1950s. He runs Uptown Swing, one of the leading companies in London for Lindy Hop, Jive, and other related dances of the era, and performs regularly for commercial events, film and TV, and private functions. He has appeared in Hollywood movies such as The Avengers 2, in ad campaigns for Guinness, and at events such as the Brit Awards, as well as regular dance events and festivals. Known for his energy and passion on the dancefloor and as a teacher and choreographer, he is one of the most popular and sought after dancers on the vintage scene.
‘This Friday night London will go back 50 years’. And this affirmation has never been so true.
We play the best music from the 50’s and 60’s, including:
Elvis Presley ★ The Beatles ★ The Rolling Stones ★ Jerry Lee Lewis ★ Chuck Berry ★ Beach Boys ★ Ray Charles ★ Etta James ★ Aretha Franklin ★ Eddie Cochran ★ Little Richard ★ Johnny Cash ★ Ritchie Valens ★ Buddy Holly ★ Carl Perkins ★ Fats Domino ★ The Everly Brothers ★ Johnny Burnette ★ Bill Haley ★ Roy Orbison ★ Bo Diddley ★ John Lee Hooker ★ Otis Redding ★ The Temptations ★ Wilson Pickett ★ Jackie Wilson ★ Ruth Brown ★ Wanda Jackson ★ Buddy Knox ★ Dion & The Belmonts ★ Gene Vincent ★ Big Joe Turner ★ Louis Jordan ★ Chubby Checker ★ Sam Cooke ★ James Brown ★ Marvin Gaye ★ The Four Tops ★ Gloria Jones ★ The Ronettes ★ The Four Seasons ★ The Crystals ★ Martha Reeves and The Vandellas ★ Trini Lopez ★ Little Eva ★ Nancy Sinatra ★ Trashmen ★ The Righteous Brothers ★ The Sonics ★ The Kinks ★ The Kingsmen ★ The Who ★ The Hollies ★ Jacques Dutronc ★ The Monkees ★ Creedence Clearwater Revival ★ Adriano Celentano and many many many more
★★★ It is the Greatest, Grooviest, Wildest, Most Exciting Beat Blast Ever to Pound the City! ★★★
OFFICIAL PAGES
www.facebook.com/twistandshout.50sand60s
www.tijevents.com
www.229thevenue.com
www.lipstickandcurls.net
www.uptownswing.co.uk 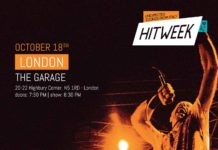 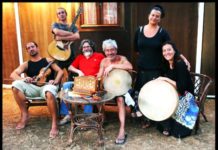 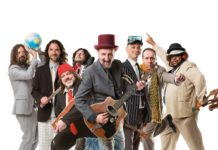 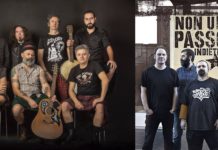