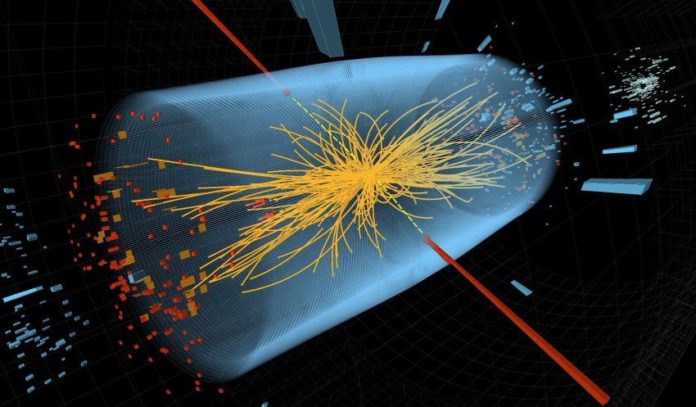 One of the most important discoveries of this century has been boson’s discovery. Higgs boson was theorized in 1964 by Peter Higgs. Just in 2012 it was observed in the experiments ATLAS and CMS (Content Management System), in a particle accelerator LHC (Large Hadron Collider) in CERN between France and Switzerland. But what is a boson? First of all, bosons (with pheromones) are one of the fundamental classes in which particles are divided. There are 4 types of particles produced into the Big Bang.

They are: muon, electron, W boson and quark top. In physics the boson is a particle that obeys to Bose-Einstein statistics and, according to the spin-statistics theorem, then have integer spin.

Higgs boson is part of this particles. But what is the Higgs boson? It consists in analysing the product of the collision of elementary particles, accelerated by some big magnet.

It’s the particle that give mass to all the other particles. When the Universe is invaded by the Higgs field, this particles are slowed down and change their energy in mass.

So the Higgs boson is a quantum of the Higgs field. But why it’s called the “God particle”? This nickname comes from a misunderstanding of the censorship of the name “Goddamn” that the physical Lederman gave it.

Its microscopic mass is very close to that theorized Higgs of 126 GeV. Moreover Higgs boson need a specific quantity of energy to compared, equal to 13,9 TeV.

In fact, when particle collider in CERN get this amount of energy, Higgs boson compared. It has been proved that God particle doesn’t have spin, also Higgs field should have a spin, than the mass of an object should depend on its orientation in the space, but the relation mass-orientation has never been observed.

So it has been concluded than Higgs’ boson has no spin according to boson definition by Bose-Einstein statistics.
CERN