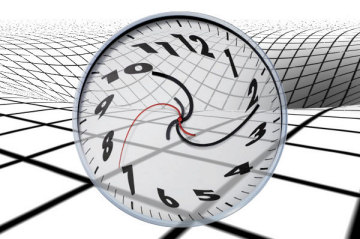 London – It may seem a trivial question, but it is not so. Man always tried to measure time but instead it is the time that measures man. Time is the dimension in which the spending and measuring of events are conceived. It induces the distinction between past, present and future.

The complexity of the concept has always been the subject of scientific and philosophical studies and reflections. The definitions of Plato and Aristotle have been a reference for many centuries until the scientific revolution. A philosophical conception of time by Aristotle was “Future doesn’t exists without a past, but the past is at the same time the future of another past.

So you could think that time doesn’t exist because time is made up of past and future. Moreover time admits a numeration, so time couldn’t exist without a soul because if nobody counts, it couldn’t exist nothing to count.

Something is forever, for example some mathematical truth (2+2=4), so they aren’t included in time. Movement always exists because it couldn’t exist time without movement and everybody admit that time hadn’t be created” (this made scandal though Christians because the Bible says that universe had a starting).

In the 18th century Isaac Newton stated that time is “sensorium Dei” (meaning God) and it flow unchanging, staying always the same; he contributed a lot on the attempt of giving a definition of time. Some centuries later, there was an important person called Albert Einstein who posed a problem: “If I ride a ray of light what would happen?” This question made Einstein the founder of the theory of relativity. He said that time isn’t absolute but it depends on the motion and on the spatial reference of the observer.

In fact Einstein sensed that nobody can exists in a definite space without existing in a definite time. So time and space are related in a 4-dimensional entity called space-time.
Our three-dimensional daily conception doesn’t allow us imagining a 4-dimensional universe but we can think it as a 2-dimensional elastic grid. All the bodies that have a mass curve this grid making it 3-dimensional. The result is the gravity force.

So the observer D says that the two phenomena aren’t simultaneous. This make us say that simultaneity and then time are relatives. 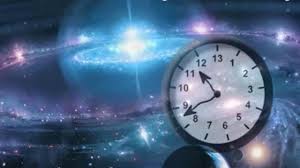 In physic the theory of relativity refers to the mathematical transformations (Lorentz’s transformations) that must be applied to the description of physical phenomena in the transition between the two systems of reference moving relatively to each other. Einstein used two postulates explaining this concept:

1. Nobody can move faster than light
2. No reference system is privileged, so everything is relative to the point of view
Starting from these two postulates, Einstein formulated the whole theory of relativity that reviews all the classical physics laws, that state for a body who moves at low speed the relation E=ma. Applying this concept to a body who moves at a speed close to the light one Einstein founded out that formula: 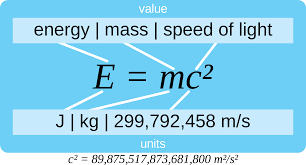 Then even a stationary particle has a certain energy (E) and this is the base of all modern physics studies. This concept can be explained by a chart, experimentally built in a particle accelerator.

The classical physic postulates the relation energy – squared speed, according to the relation E=(1/2)mv2, as a linear relation but the theory of relativity, according to experimentally results, states that more the energy, less the rapidity of the speed’s increase.