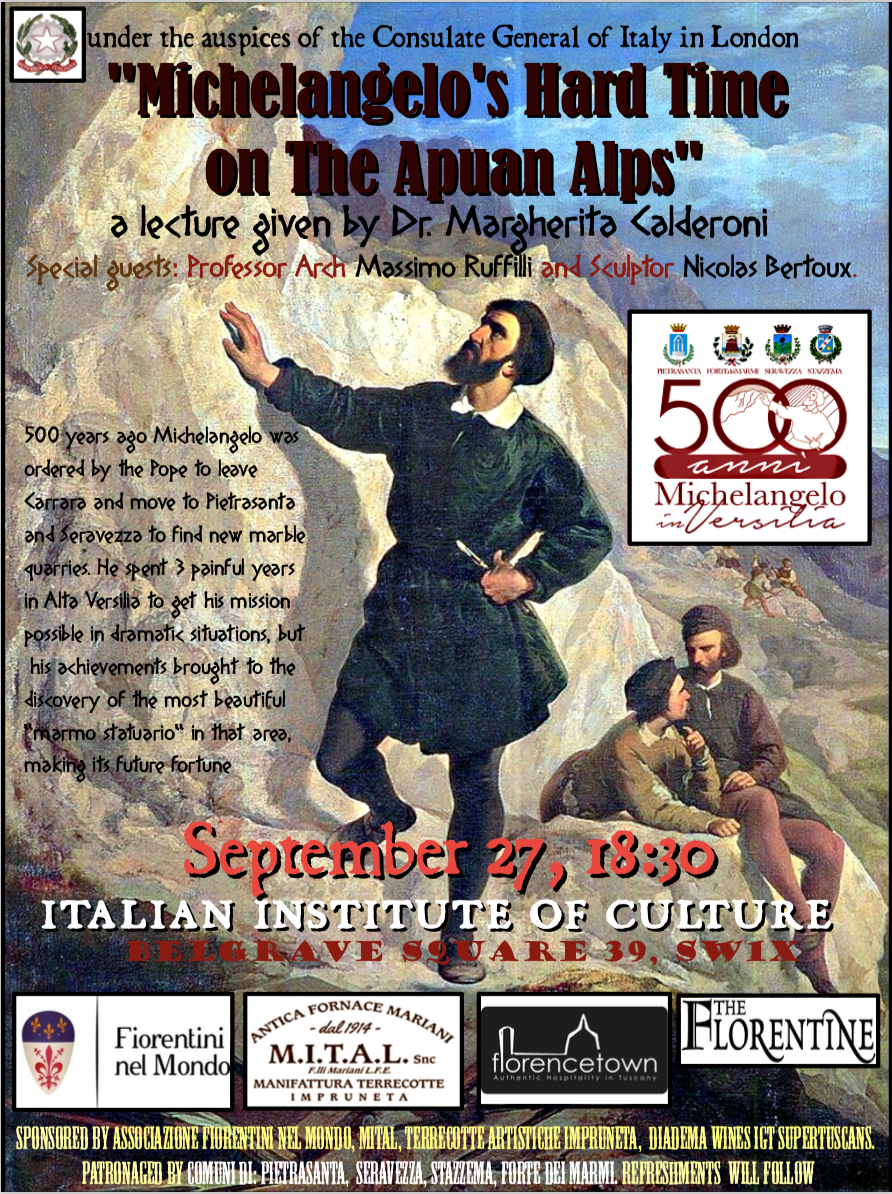 London (Caterina Moser) – The event “Michelangelo’s Hard Time on the Apuan Alps” will be on 27th September at the Italian Institute of Culture in London.

Once upon a time… It is not a fairy tales. It is a significative part of Italian and Tuscany history. 500 years ago, Michelangelo Buonarroti was sent to Alta Versilia by Pope Leo X. It was a difficult time which the italian sculptor considered a failure, but that was the origin of the marble industry in Alta Versilia.

Under the auspices of the Consulate General of Italy in London, The Association Fiorentini nel Mondo presents “Michelangelo’s Hard Time on the Apuan Alps”. The event will take place at 18.30 in Belgrave Square 39, where Institute of Culture in London is based.

The journalist and historian Margherita Calderoni – Proconsul in Uk for the Fiorentini nel Mondo Association – will talk about the time in which Michelangelo passed in Alta Versilia and the origin of the marble industry in that area.

The event will have the contribution of Professor Massimo Ruffilli from Florence, expert of the San Lorenzo façade complex story and promoter of a project involving the Michelangelo design for it. There will be also another special guest: Sculptor Nicolas Bertoux, owner of a historical marble laboratory and founder of ARKAD, the cultural foundation in Seravezza recognized for their world-class capabilities as an innovative, delivery focused transformational learning organization.

It is always a good reason to talk about and remind Michelangelo. In this case, the 4 historical Communities of Verisilia – Pietrasanta, Seravezza, Forte dei Marmi, Stazzema – will celebrate Michelangelo’s presence on their territory.

500 years ago, Pope Leo X ordered Michelangelo Buonarroti to excavated marble in Alta Versilia for the façade of San Lorenzo in Florence. He had to leave his beloved Carrata and find a new quarries.

Michelangelo tried to oppose to the papal decision, in vain. Indeed, there was an economic reason: the Capitanato of Pietrasanta was under Florence influence and so the marbles from that Apuan districts came for free.

His life in Alta Versilia was dramatic. He was a sculptor, a painter and an architect. Now, he had to improvise himself as road worker and quarryman also. He spent three years of hard working declaring “I am the most unhappy man in the world”. He faced the asperity of places and the rusticity of the locals.

In one of the many letters to his brother he declared regarding the incompetence of the local workers “It looks like having to resurrect the dead when I try to tame these mountains or to instill skills in this country”.
Even if he was sick and fed up, he kept working and snatched marble from the mighty “Altissimo”. And it wasn’t easy. In those three years among technical problems and personal worries from Leo X, he complained about lack of collaboration and money.

However, he carried on and he found splendid “marmo statuario” on Monte Altissimo. He also built a road to the see for shipping it to Florence.

A failure and a waste of money. Leo X discharged Michelangelo in 1520.

In reality, what looked as a failure and a waste of money was discovered as a resource. Years later Granduke Cosimo I guessed the potentiality of that area and continued Michelangelo’s deed. He built a gorgeous Villa in Seravezza, completed the road from Monte Altissimo to Forte dei Marmi and paved the way for the marble industry in Versilia.

Michelangelo left an significant mark in Alta Versilia and – after 500 years – it is important to celebrate him.

The event is under the auspices of the Consulate General of Italy in London, under the patronage of the Comuni Pietrasanta, Seravezza, Forte dei Marmi, Stazzema. With The Florentine newspaper as media sponsor, the event is sponsored by Fiorentini nel Mondo cultural Association, Mital – artistic terracotta factory and Florencetown – cultural tours operator.

Cheese and wine reception will follow, to toast to Michelangelo with the renown Diadema IGT wines from Tuscany.